The Wolf in Europe

The Wolf in Europe

With its large cities, modern infrastructure network and extensive areas under intensive agriculture, Europe seems an unlikely place for a large carnivore comeback. But despite this, a 2011 study commissioned by Rewilding Europe from the Zoological Society of London and partners found five European carnivore species – the brown bear, Eurasian lynx, wolverine, grey wolf and golden jackal – all expanding their range. In many areas of the continent, these animals are surviving and increasing outside protected areas. This comeback, especially with regard to wolves and bears, shows the amazing resilience of these animals; populations are returning in a human-dominated landscape. During a time where biodiversity is in crisis globally, Europe’s carnivore comeback offers a contrast and a positive outlook for species conservation and human wellbeing.

Perhaps the most remarkable comeback of any carnivore in Europe is that of the Eurasian wolf (Canis lupus lupus). 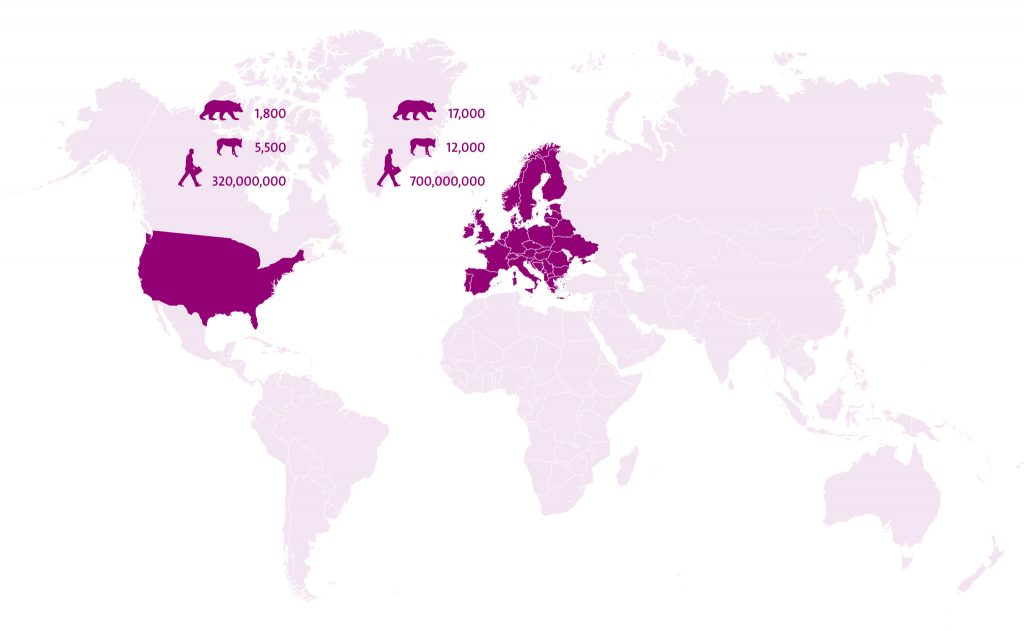 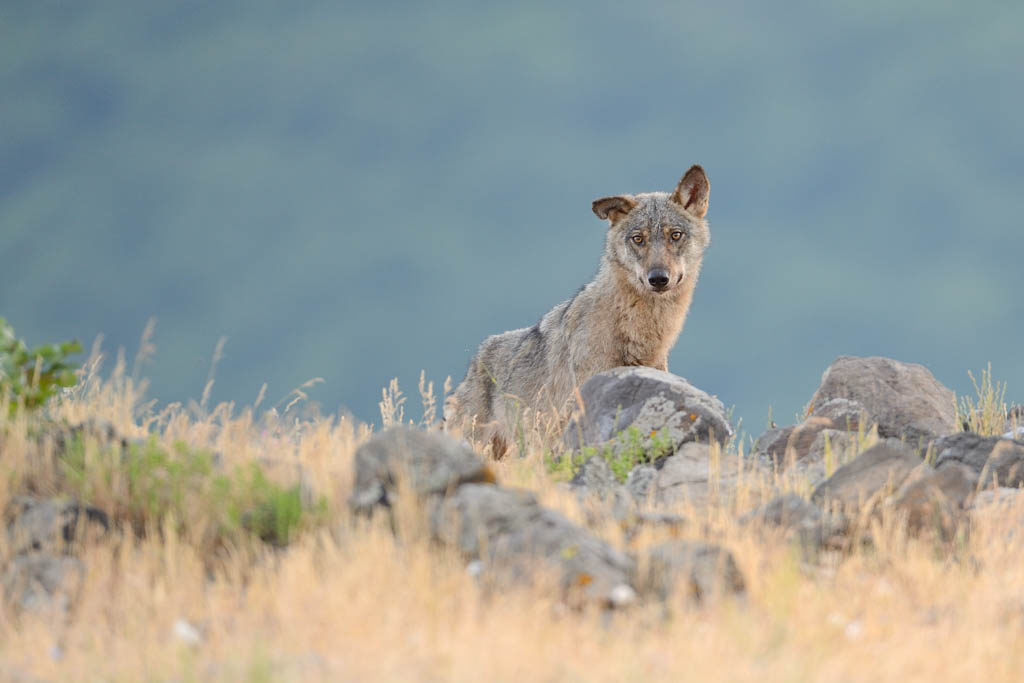 The fall and rise of the wolf in Europe

In some areas of Europe there have always been stable populations of this grey wolf subspecies, but a long history of hunting and persecution meant that by the first half of the twentieth century the animal had disappeared from most Western European countries. In the second half of the twentieth century opinion on wolves began to change, and the animal is now protected in most European countries.

Spreading outward from strongholds in Poland and the Carpathians, Eurasian wolf packs and individuals have now been spotted as far west as the Netherlands, Belgium and Luxembourg. In total, the grey wolf population in Europe is estimated to be at least 17,000 animals (excluding European Russia) in 28 countries. 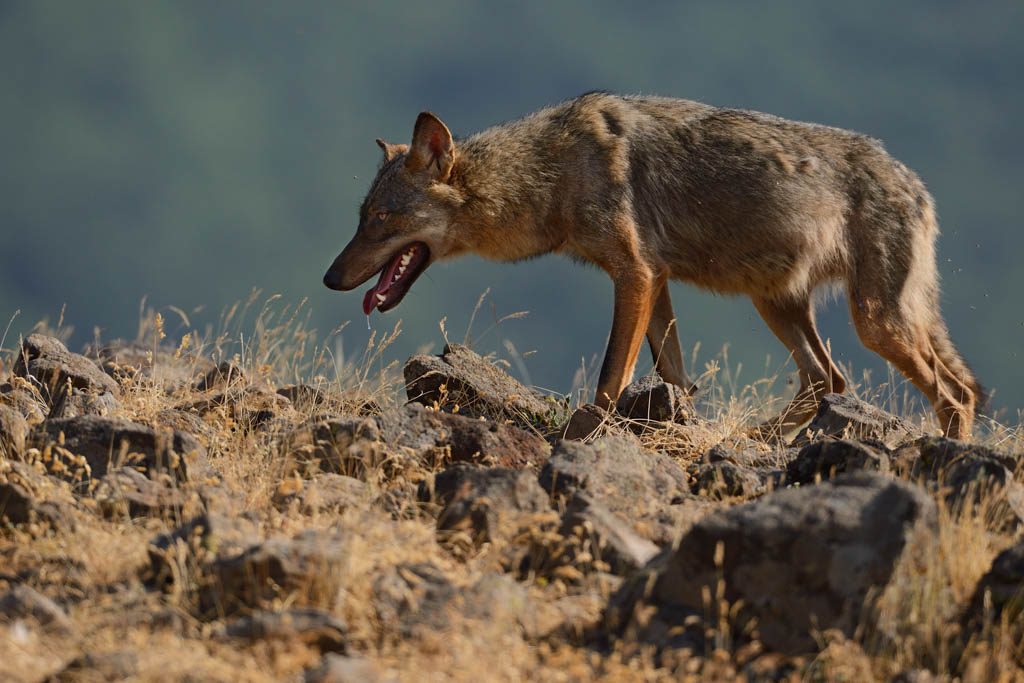 There are five subspecies of wolf found in Europe, of which the Eurasian wolf is the most common and widespread. On average it weighs around 40 kg, with relatively short and coarse tawny fur. Many Eurasian wolf populations are forced to subsist largely on livestock and rubbish in human-dominated areas, though wild ungulates (hooved animals) such as moose, red deer, roe deer and wild boar are still the most important food sources in Russia and Eastern Europe.

Wolves are highly social animals that live in extended family groups called packs. Adaptable and resilient, they can survive in a variety of habitats, including forests, tundra, mountains, swamps and deserts.

“If wolves could swim to London, they would.
Despite the presence of man, these animals are thriving and filling a niche.” The wolf is a so-called apex predator and plays a key role in European ecosystems. As a keystone species, wolves have both a direct and indirect impact on prey populations. Besides direct predation, wolves affect the behaviour of their prey through the so-called “ecology of fear“, meaning the presence of a predator also induces behavioural and physiological changes in prey species. This has a positive impact on the landscape, enabling many other plants and animals to flourish. In this regard, wolves initiate a domino effect, affecting species as diverse as birds, beavers, fish and butterflies. Without the presence of predators such as wolves, ecosystems are less healthy and support less abundant wild nature.

When wolves were reintroduced into Yellowstone National Park in the western United States in 1995 after a 70-year absence, their comeback ignited a chain reaction, boosting the restoration of ecosystems that had been degraded in their absence. 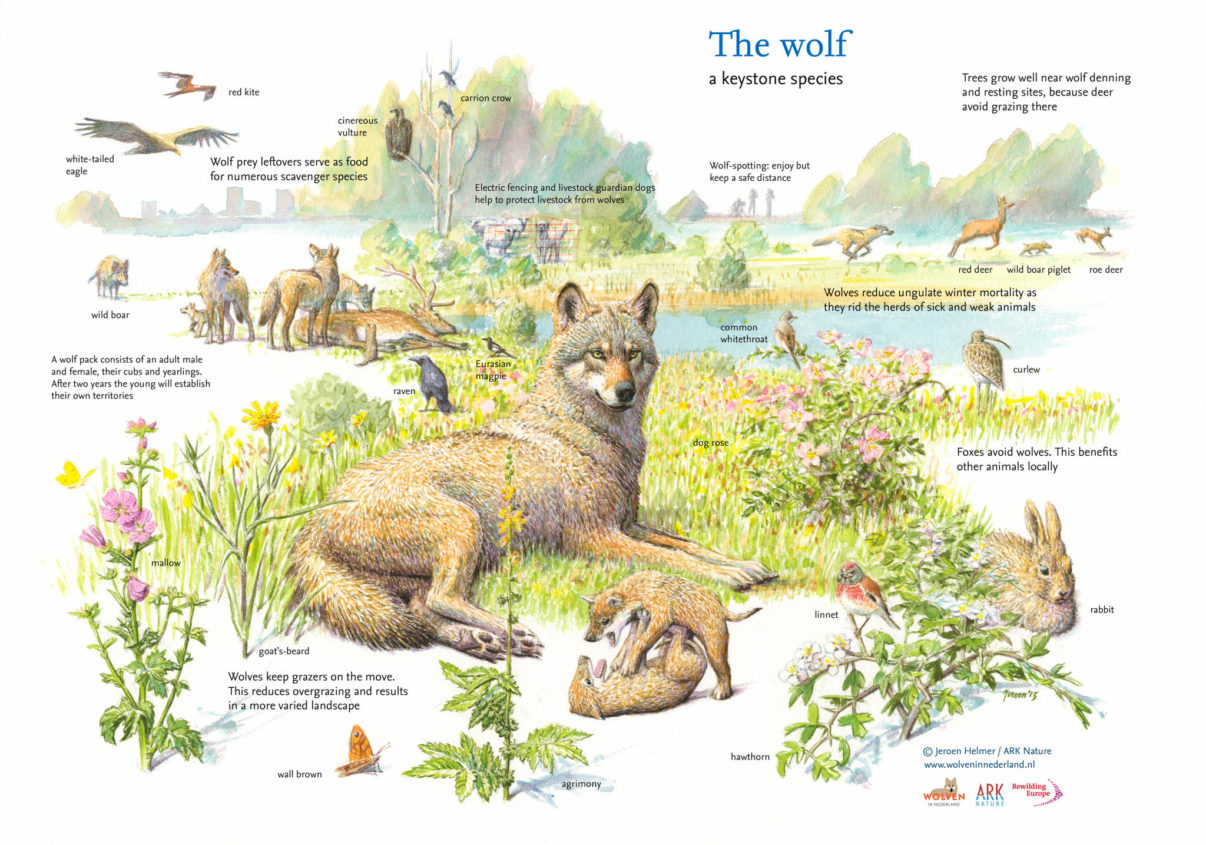 Wolves in our rewilding areas

In the Rhodope Mountains, Velebit Mountains and Greater Côa Valley we are supporting natural wolf comeback by boosting the availability of natural prey (red deer, fallow deer and roe deer). 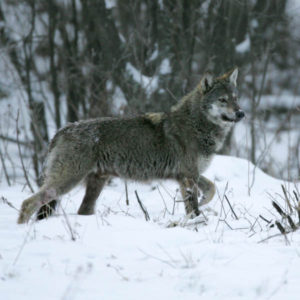 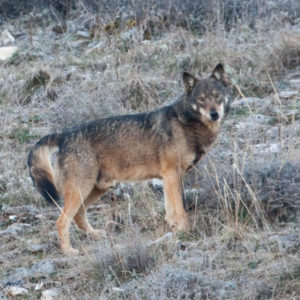 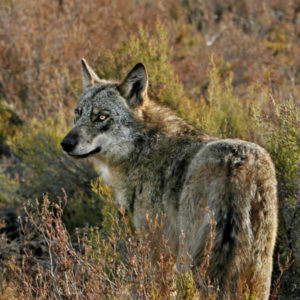 Supporting the Iberian wolf in Portugal 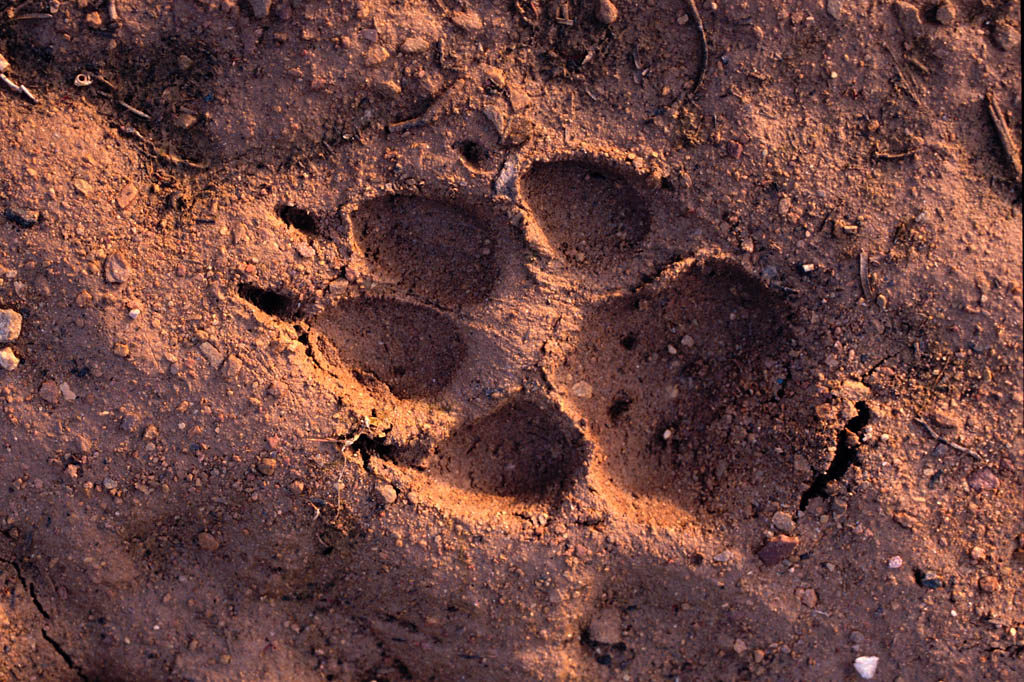 The Iberian wolf (Canis lupus signatus) is a subspecies of grey wolf inhabiting the northwest of the Iberian Peninsula (northern Portugal and northwestern Spain). This area is home to between 2,200 and 2,700 Iberian wolves, which have been isolated from mixing with other wolf populations for over a century. 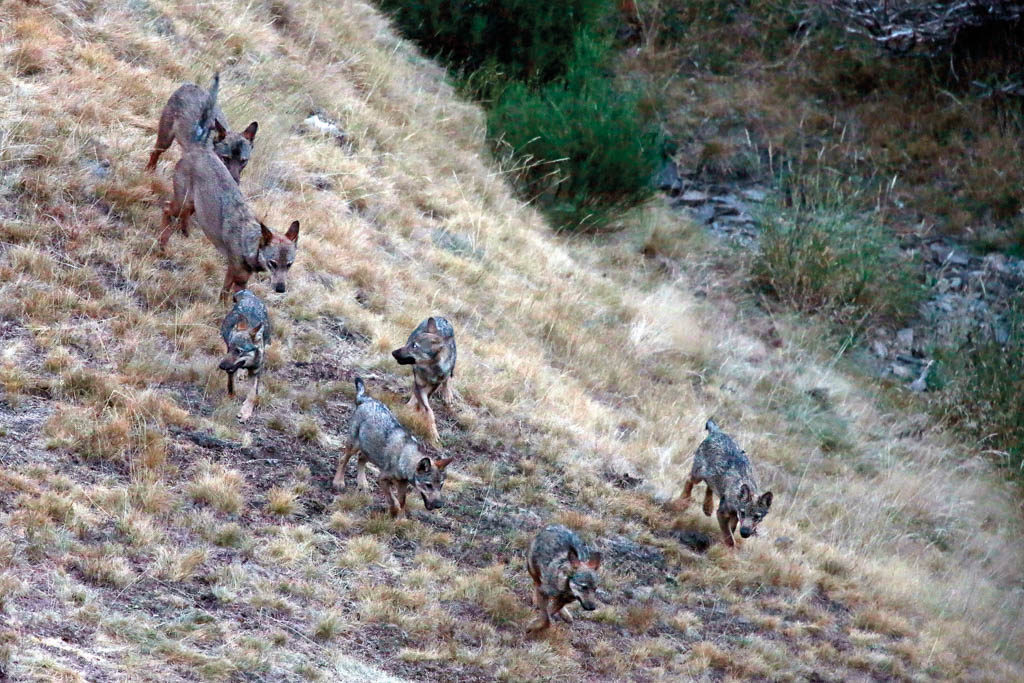 Studies estimate that the Portuguese population of Iberian wolf currently totals between 250 and 300 animals, divided in two by the Douro River. While the subpopulation north of the Douro is larger and more stable, south of the Douro there are only a handful of scattered packs. A lack of natural prey (such as roe deer) means these packs have no choice but to prey on livestock, which causes conflict with farmers and often results in the animal’s persecution. 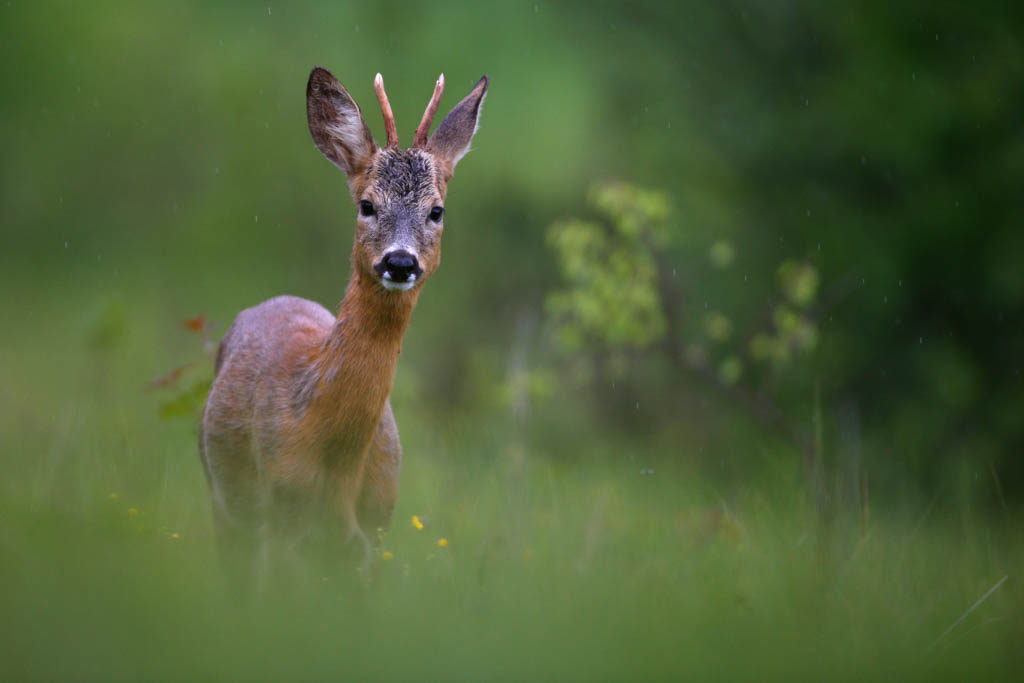 Under the framework of the LIFE WolFlux initiative, which is funded by the European Commission and co-funded by the Endangered Landscapes Programme, the Rewilding Portugal team and local partners are now working to support the Iberian wolf population south of the Douro. Support measures, which are focused on improving relations between local people and wolves, include efforts to boost local populations of roe deer (thereby minimising livestock predation) and the introduction of a livestock guard dog programme. 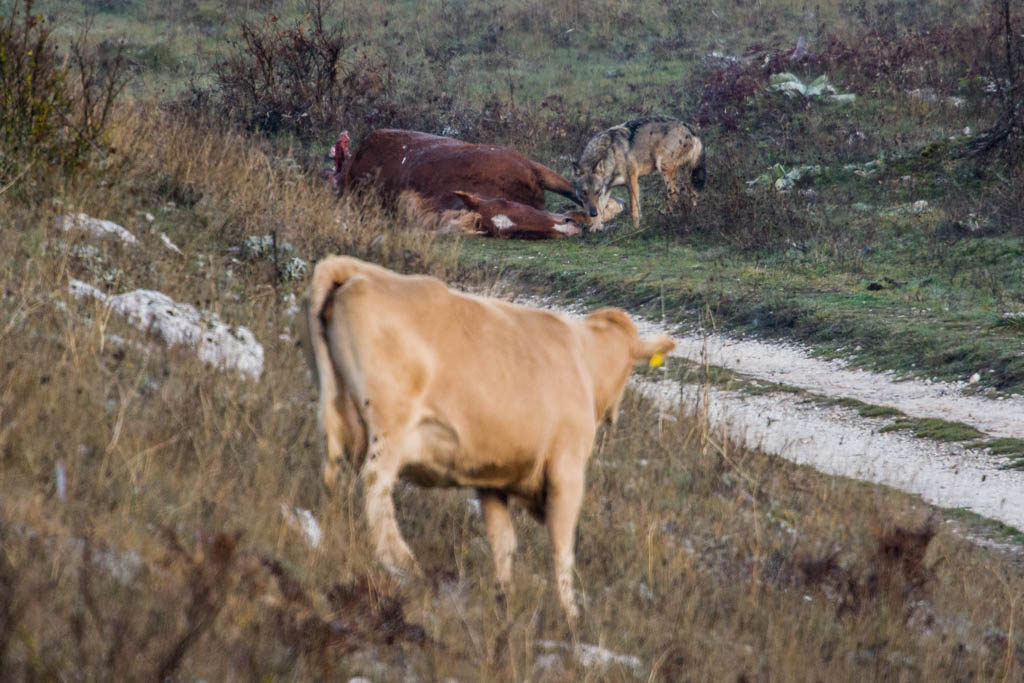 In many areas of Europe wolves will prey on livestock, which causes farmers and shepherds to resent the animal’s presence and in many cases shoot the animal on sight. However, this predation is largely due to a scarcity of the wolves’ natural prey. Studies have shown that even when livestock is abundant in wolf territory, wolves still mostly prefer to feed on wild animals such as deer and wild boar. Boosting the availability of natural prey is therefore critical to improving human-wolf relations. 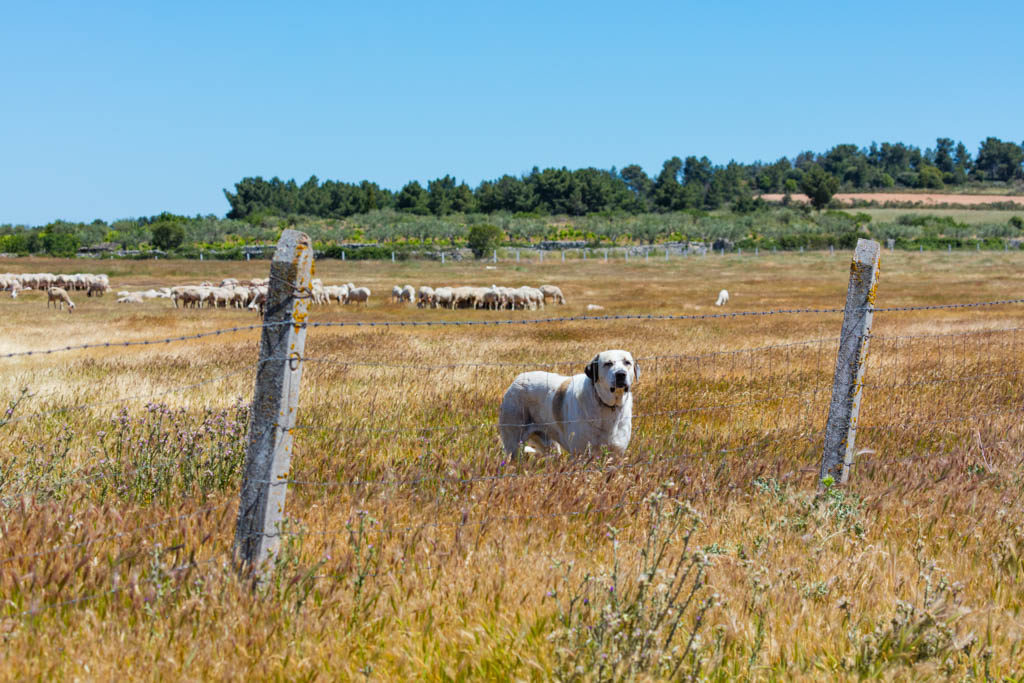 As Europe’s New Wild – “Return of the Titans” shows, livestock protection measures can significantly reduce the incidence of wolf attacks and also improve human-wolf relations. As a preventative measure, the use of guard dogs and fencing to protect livestock is a far better solution than providing compensation for attacks after they have occurred. 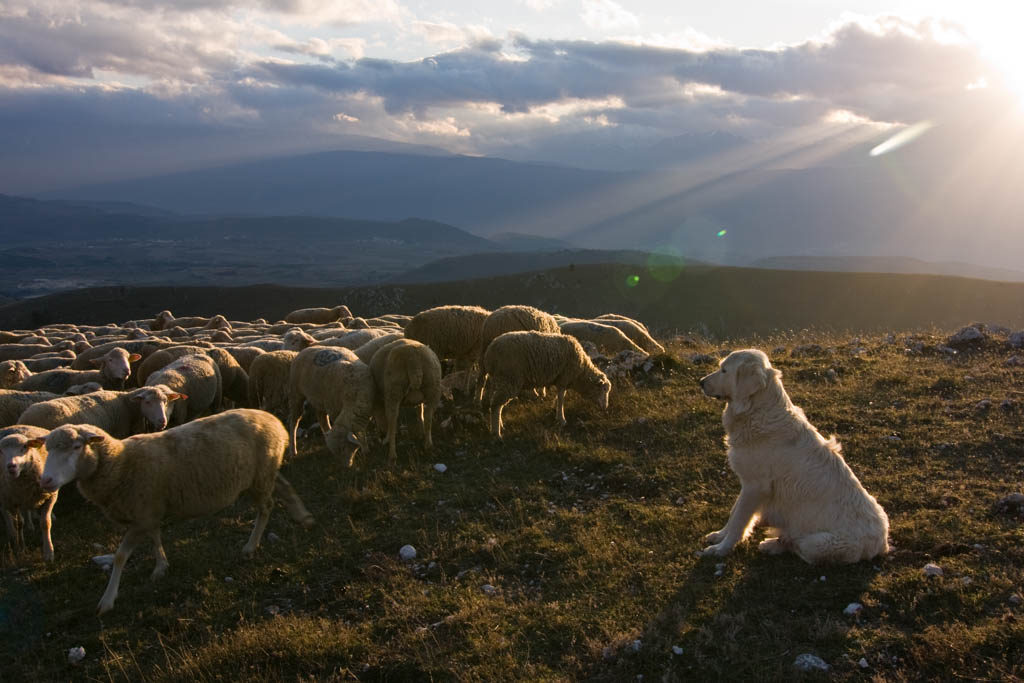 In the Greater Côa Valley rewilding area in Portugal, the Rewilding Portugal team has introduced a livestock guard dog programme as a way to support Iberian wolves south of the Douro River. The target is to eventually embed 100 dogs with livestock flocks and herds in the area. The Serra da Estrela dogs used in the programme have been guarding livestock (sheep, cattle and goats) south of the Douro against attacks by Iberian wolves for centuries.

Behind the scenes: a closer look at the new Rewilding Portugal documentary