Where the mighty Danube river meets the Black Sea, it has created a massive delta land, Europe’s largest wetland area. It is still surprisingly wild and relatively undestroyed.

The 580,000 hectare delta is home to massive amounts of waterbirds of all kinds, most notably pelicans of two species, herons, storks, cormorants and terns. It is a favourite staging area for passage migrants and also wintering grounds for masses of migrating waterbirds from the steppes, the boreal forests and the tundras further north.

The massive productivity of the many water habitats here has led to the delta harbouring the largest number of fish species anywhere in Europe. Flagship species of which are the four species of sturgeon, which once used to wander the entire length of the Danube river all the way up into Germany. The area has unprecedented potential for wetland restoration and rewilding, in particular the former polders and lakes can be reflooded and reconnected with the Danube river dynamics.

The war in Ukraine is unfolding in a terrible way. We are doing what we can to help our team and partners that are living and working in the Danube Delta region.

With your donation, we will be able to purchase and transfer medicine, equipment and any other priority item to cover the needs of staff, employees and their families in Ukraine. 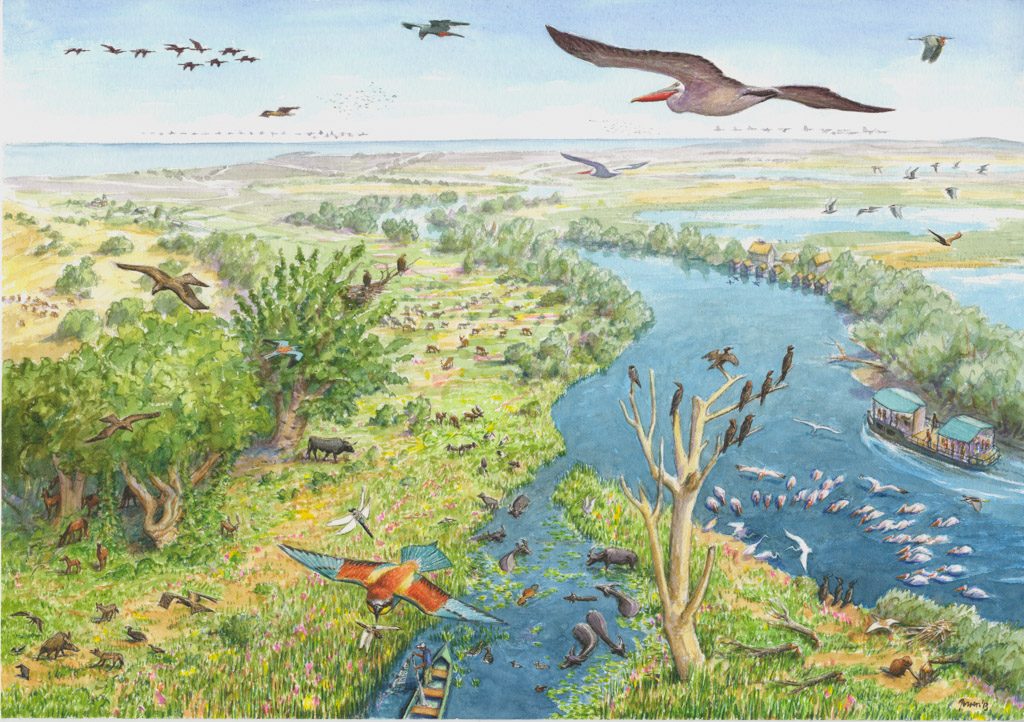 For each rewilding landscape we developed an inspiring vision that shows our ambition for the next ten years. Together with our local partners we work to make this vision a reality.

One of the least populated areas in Europe, the Danube Delta offers a unique opportunity to restore a whole spectrum of biodiverse habitats – from open estuarine systems, naturally grazed grassland and vast reed beds through to freshwater marshes, coastal lagoons, shallow lakes and riverine forests.

Working with partners, the rewilding team is working to significantly improve the ecological integrity and natural functioning of 40,000 hectares of wetland and terrestrial delta habitat, using rewilding principles at on a landscape scale. Revitalised and self-governing natural processes, particularly flooding and natural grazing, will govern landscape formation, driving other natural processes, wildlife comeback, increased biodiversity and the development of a nature-based economy.

The Danube Delta is one of the case study landscapes of the three-year GrazeLIFE project. The project evaluates the benefits of various land management models involving domesticated and wild/semi-wild herbivores.

The Danube Delta region is economically depressed, with high levels of unemployment, rural depopulation, low living standards and a strong dependence on natural resources. There is therefore a continuous risk of unsustainable and unwanted development in this sensitive landscape.

Rewilding Europe is working to create new opportunities for delta communities by supporting the development of nature-based business. We establish best pratice models, provide business development support, and, where possible, financial support through Rewilding Europe Capital. Our experience in the Romanian village of Sfântu Gheorghe and the Ukrainian village of Orlovka shows that this, in turn, creates incentives for restoration, encourages acceptance of wildlife comeback, and instills a strong sense of pride in the local area.

In collaboration with partners, we are also working to construct nature tourism infrastructure, such as wildlife watching towers, panels and hides. The Rewilding Europe enterprise team is backing this up with theoretical and practical training sessions on the provision of wildlife watching activities. How would you characterise your rewilding landscape?
The Danube Delta is Europe’s largest remaining natural wetland – a truly unique ecosystem. The delta region includes extensive examples of unaltered rivers, lakes, reed beds, marshes, steppes, dunes, sandbars, coasts, lagoons, salt marshes and climax forests. Local communities in the Danube Delta (the Danube Delta Sub-Basin District supports more than one million people) have little knowledge and limited capacity to use ecosystems in an economically and ecologically sustainable way, directly impacting living standards and biodiversity. With the delta acting as a historic crossroads, this is an extremely diverse region in terms of nationalities, with each preserving its customs and traditions.

What have the major achievements been in your rewilding landscape to date?
The restoration of large islands in the Danube Biosphere Reserve, one of the most successful wetland restoration projects in the region. Also a number of community-based projects, in collaboration with the muncipality of Orlovka. These have included local wetland restoration, the reintroduction of water buffalo for natural grazing, and the establishment of a nature park to generate income for the community. We now take this work further as Rewilding Ukraine.

What would you like to see achieved in your rewilding landscape in the next five years?
We have a fairly ambitious plan to restore large wetlands in the Danube Delta, as well as steppes in the Danube Delta region. I would also like to see more large herbivores introduced, and the further development of several nature-based economic initiatives. All of this will build on our past success and the partnerships that we have forged over almost two decades of conservation work on the Ukrainian side of the delta.

Stories from the landscape

Second shipment of kulan arrives in the Ukrainian Danube Delta

Where the mighty Danube river meets the Black Sea, it has created a massive deltaland, Europe’s largest wetland area. Visit the home to massive amounts of waterbirds of all kinds, most notably pelicans of two species, herons, storks, cormorants and terns. It is a favourite staging area for passage migrants and also wintering grounds for masses of migrating waterbirds from the steppes, the boreal forests and the tundras further north.

Mykhailo Nesterenko was born in 1974 in Ukraine. He graduated from the General Biology Faculty in Odessa, Ukraine and has more than 15 years of experience in nature conservation, sustainable development and rural development projects with WWF and as a consultant for, SABMiller, GIZ.

Mykhailo started his career as a zoologist mostly working on bird conservation. He has participated in various expeditions in both Ukraine and abroad. His consultancy work focused on the development of regional strategies and plans for the Danube Delta region of Ukraine, Romania, and Trans-boundary Climate Change Adaptation Strategy for the Danube Delta region. He is most proud of his work on a climate change adaptation strategy for a village in the Danube Delta and shares Rewilding Europe’s philosophy of doing locally but thinking globally. In the most recent years, Mykhailo focused was on large herbivores reintroduction projects and natural grazing projects in Ukraine.

Over many years of working in Ukraine, he built strong links and relations with stakeholders and partners in the Danube Delta region and has in depth knowledge of national and local conservation in Ukraine. He will focus on building up rewilding projects for restoration of wetlands and wildlife in partnership with local communities and businesses. He has been Team Leader of the Danube Delta Ukrainian rewilding team since April 2017.

Serban Ion was born in 1975 in Bucharest, Romania. He visited the village of Sfantu Gheorghe in the Danube Delta for the first time in 1989. As he has continued to explore the delta, so his passion for the area has also grown.

Serban graduated from the Romanian – American University of Bucharest with a degree in Internal and International Economy and Tourism. The subject of his Bachelor’s Degree thesis was rural tourism in the Danube Delta, with a focus on Sfantu Gheorghe and its environs. Over the past 10 years he has been employed in a consultancy role for various projects and associations in the area.

Serban has an in depth knowledge of national and local conservation in Romania, including policy, legislation and local stakeholder issues. He is now working to build up a strong network of partners within the Danube Delta region, integrating rewilding principles with the habits and traditions of the local people.