Megafauna restoration is a legal obligation

Large mammals (megafauna) have crucial roles in ecosystems. Megafauna restoration is therefore a key element of rewilding. A new study finds that restoring Europe’s megafauna as much as possible is in fact a legal (and moral) obligation.

Then, during a brief period spanning the Late Pleistocene and Holocene – the blink of an eye in geological and evolutionary terms – many of these large mammals, including all the very largest, disappeared from the continent. Others were decimated. The cause: Homo sapiens.

Given the crucial ecological roles of large mammals, the collapse of the megafauna has profound implications for the functioning of European ecosystems and for the prospects of biodiversity as a whole. The good news is that it is possible to repair the damage to a significant extent. Depending on the species, this can be achieved through the promotion of natural comebacks, active reintroductions, and through introductions of proxies for extinct species. 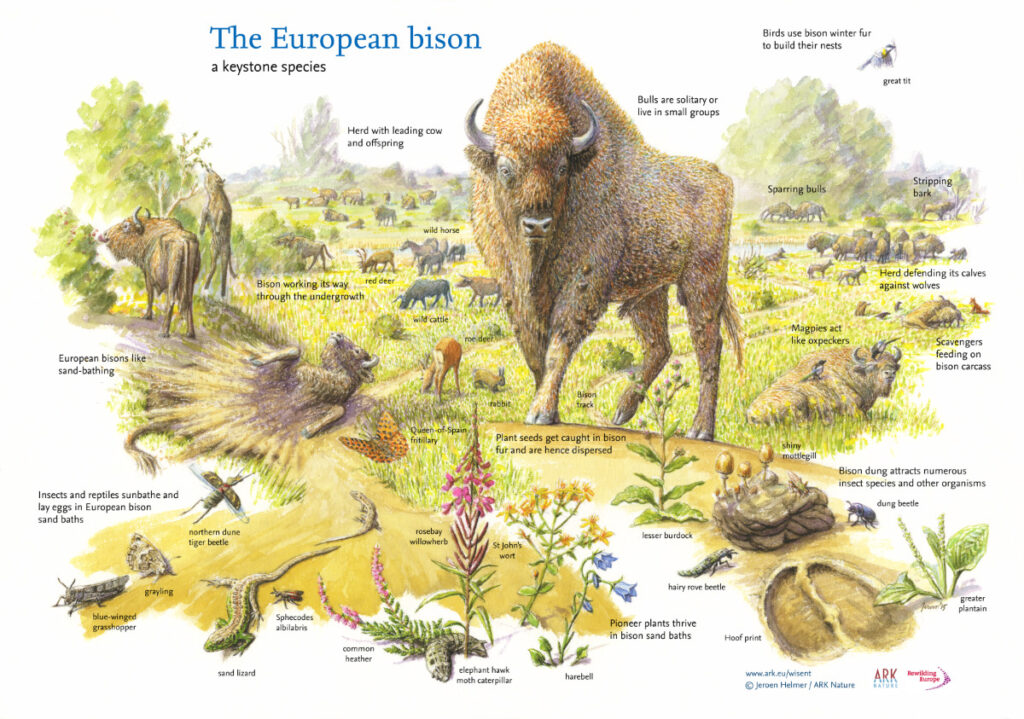 Law and policy at national and international levels tend to influence such rewilding scenarios. The role of law can be positive, when it promotes or even requires restoration efforts, or negative when it makes such efforts difficult or impossible. In any event, the need for ecosystem restoration has been rising fast on intergovernmental agendas. For instance, 2021-2030 has been declared the Decade on Ecosystem Restoration by the United Nations. And the European Union (EU) has set ambitious restoration targets of its own.

Against this background, we – a Tilburg University environmental lawyer and an Aarhus University ecologist – conducted a research project addressing the question to what extent international law currently promotes European megafauna rewilding measures. Combining our disciplines, we interpreted relevant legal instruments in light of the best scientific evidence available and international policy statements. Our freshly published findings show that various legal instruments at global, pan-European, EU and other levels support or even require megafauna restoration efforts. Examples are the EU Habitats Directive, the Bern Convention on European Wildlife Conservation, the Biodiversity Protocol of the Carpathian Convention, and the Convention on Biological Diversity (CBD).

Especially important is Article 8(f) of the CBD, which lays down a demanding ecological restoration obligation for European governments and the EU. As our analysis shows, meeting this obligation not only requires providing sufficient space, connectivity and room for natural processes, but also restoring the diversity and densities of Europe’s megafauna as far as possible – which is indeed quite far.

That much is possible, of course, does not mean it is easy. Our paper traces the dimensions of the megafauna restoration challenge by listing all 74 terrestrial mammal species with an average weight of more than 10kg that would probably have occurred in Europe today, had it not been for our ancestors. Over 50% of this entire European megafauna has gone missing, and many surviving species have reduced ranges and numbers. Moreover, the biggest species have been hardest hit. When looking at the 35 species weighing over 100kg, the losses exceed 75%. And the weight class of over 1000kg, which included eight megaherbivores – hippo, rhinos, elephants – has been wiped out 100%.

The paper categorizes species in ways that make sense from a law and policy perspective. For instance, some species can make a comeback by themselves, as wolves are doing. Others can be reintroduced from elsewhere in Europe, such as wisent, or from beyond, such as onagers and moon bears from Asia, or hippos and spotted hyenas from Africa. Some species where the original wild forms are extinct, particularly aurochs and wild horses, can be replaced by back-breeding and rewilding domesticated descendants. The ecological roles of other globally extinct species can be restored only by introducing surrogates, such as de-domesticated Asian water buffalo and Asian elephants. The role of law regarding such scenarios will vary according to the circumstances.

Needless to say, ecological, social, cultural, economic and other non-legal aspects of practical importance also vary from one scenario to the next, calling for approaches that are holistic, adaptive, and tailored to local contexts. To illustrate, on the one hand there is already much experience with reintroductions of species like beaver and wisent, and with the rewilding of cattle and horses. Such activities can be scaled up comparatively easily in various parts of Europe. On the other hand, reintroductions of long-absent species (e.g., moon bear) and introductions of proxy species to replace extinct ones (e.g., Asian elephant) will require significantly more groundwork and are likely to be initially conducted only in small-scale, experimental form, subject to careful monitoring, adaptive management and suitable safeguards to avoid undesirable impacts on local ecosystems and human interests.

To comply with their obligations under the CBD and other legal instruments, governments will need to address legal obstacles currently hampering megafauna restoration. Important examples are the incongruous application of all kinds of veterinary, sanitary and animal welfare requirements to rewilded cattle and horses, and even to wisent. This affects issues such as transport, health inspections and medical treatment, supplementary feeding and the (im)possibility of leaving carcasses in the landscape to feed the circle of life.

Plans for the adoption of dedicated EU legislation on ecosystem restoration, which are part of the new EU Biodiversity Strategy, present a golden opportunity for the effective implementation of the various obligations within the EU. Clearly, there are compelling arguments to pay explicit attention to the role of megafauna in the provisions of this new legal instrument.

It is easy to see how some of the rewilding scenarios mentioned above could be controversial – especially when involving dangerous animals, and species that are long gone from European societies’ collective memories because of the ‘shifting baseline syndrome’. In this connection, it is important to keep an eye on the big picture and to highlight the ethical obligations that we discuss in the paper in addition to our scientific and legal analysis.

A particularly significant moral argument concerns North-South solidarity. Given what we know about the (pre)history of megafauna in Europe and across the globe, the current situation reflects a grossly unfair situation, wherein the burden of conserving and restoring large mammals is put largely on the shoulders of countries in Africa and Southern Asia, where most megafauna remains. Indeed, few people would (dare) argue that Europeans deserve privileges that people in Africa and Asia do not – in this case the privilege of living without unruly large mammals that can pose a threat to human interests, including human safety. In short, it would be manifestly unjust to expect poor and rapidly growing human populations in the Global South to keep preserving and co-existing with dangerous big animals, without also undertaking ambitious megafauna restoration efforts in Europe.

A Trouwborst & J-C Svenning (2022) Megafauna restoration as a legal obligation: International biodiversity law and the rehabilitation of large mammals in Europe. Review of European, Comparative and International Environmental Law.