The comeback of the European bison is one of Europe’s most heartening wildlife recovery stories. Once widespread across the continent, this magnificent animal was driven to the edge of extinction in the early twentieth century by hunting and habitat loss.

When the last wild European bison was shot in the Caucasus in 1927, there were less than 60 individuals alive in zoo and private parks. From the 1950s onwards, European bison began to be reintroduced back into the wild.

Free-ranging herds are currently found in many European countries, including Germany, Switzerland, Poland, Belarus and Lithuania. The Białowieża Primeval Forest, an ancient woodland that straddles the Poland-Belarus border, continues to host the world’s largest free-living population, with around 1000 wild bison.

In the last 10 years, the number of free-roaming European bison has increased from just over 2500 to around 7000 individuals. More about the recovery of this species going from strength to strength in our Impact Story ‘Back from the Brink’. 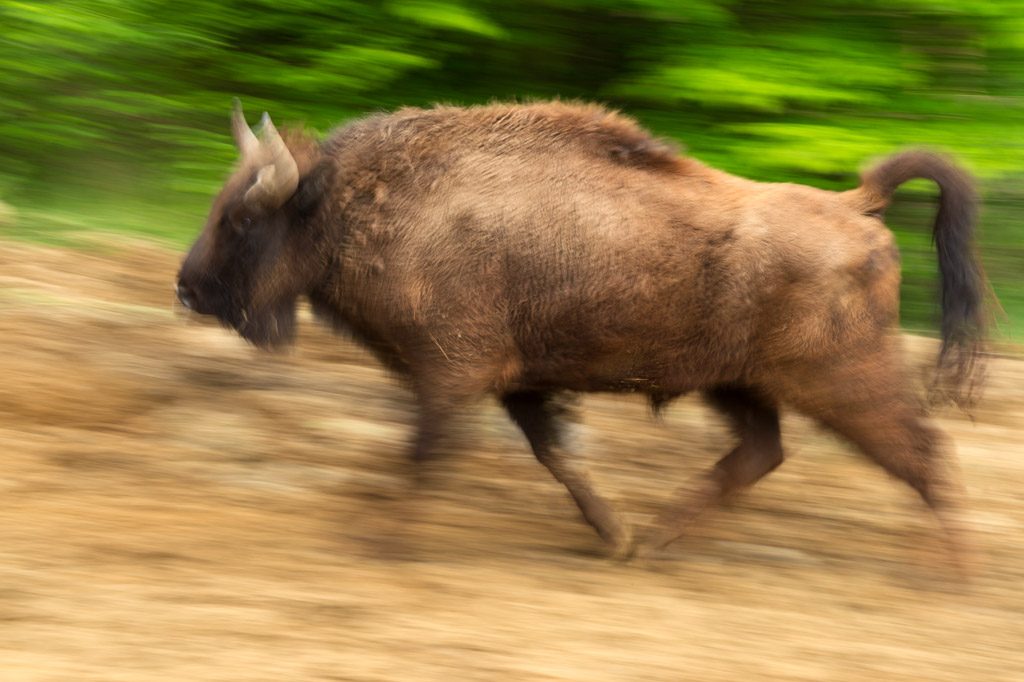 A symbol for Europe

Many people connect bison with wide, open spaces of North America, where the animals used to roam in their tens of millions before being hunted to near extinction. But bison also exist in Europe; the European bison, or wisent, once inhabited much of the European continent – from the Massif Central region of France in the west, to the Volga, the Caucasus and beyond in the east, before populations were decimated by hunting.

Rewilding Europe supports the efforts to bring back the European bison to its ancestral lands. Establishing new wild bison populations in several of our rewilding areas, and assisting the return of bison also to other places in Europe. 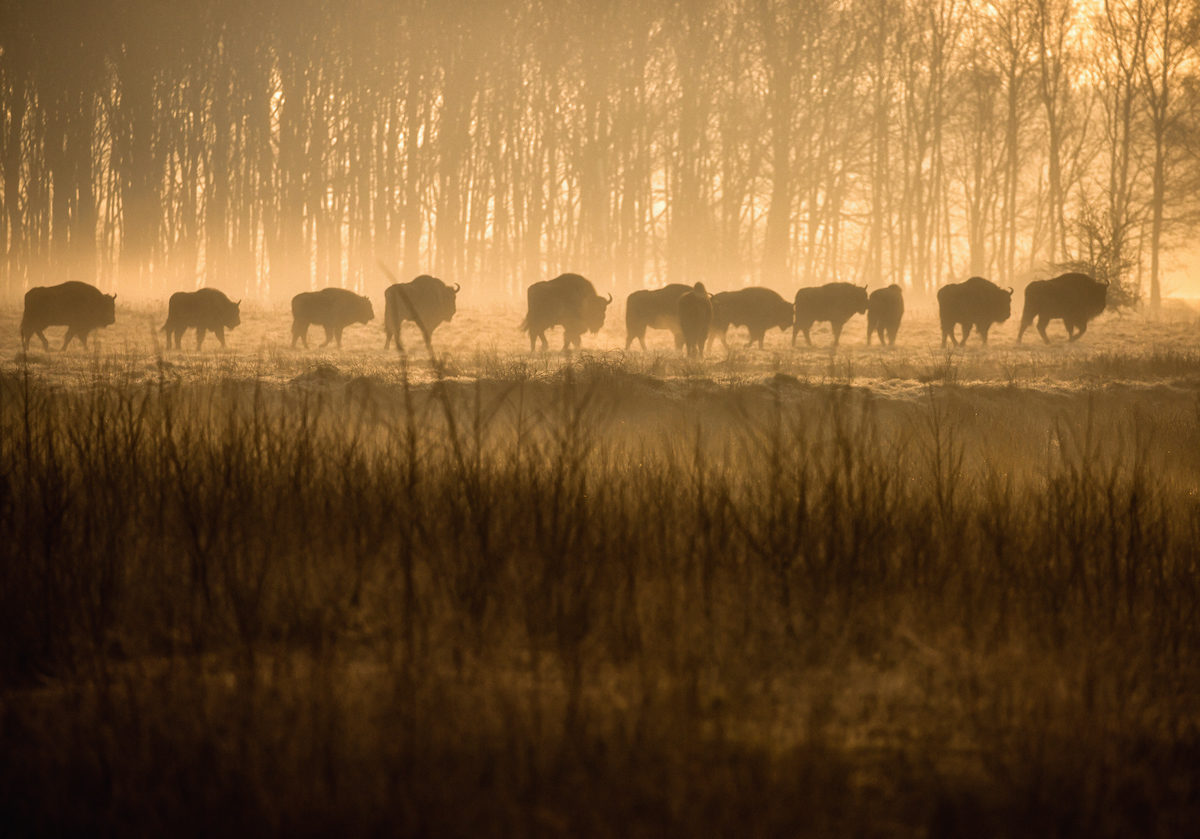 Back into the wild

The species only survived thanks to 54 animals that were kept in different zoos, originating from only 12 founder animals. In 1954 the first bison were released back into the wild in the Białowieża forest in Poland, followed by reintroductions in several other countries. 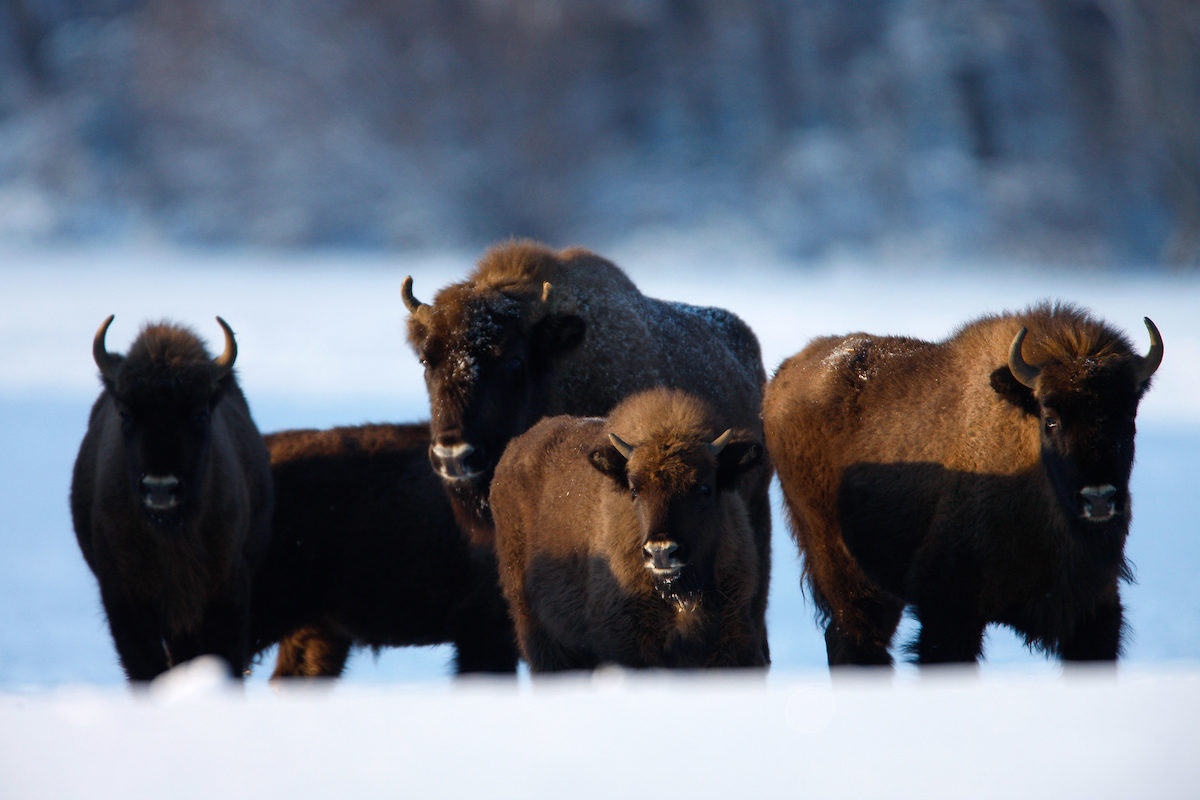 Potential and need for population growth

Thanks to the work of many organisations, zoos and breeding centres, scientists and individuals, the bison was rescued from extinction. However, the species is still in great danger, and is listed as ‘near threatened’ on the IUCN Red List.

The main problem is that too few areas across Europe are open to receiving bison for reintroduction, which is often due to misconceptions about the animal. There is now a growing realisation that European bison prefer to inhabit mixed landscapes of open grassland and forest. This, coupled with evidence to show that they can live in relatively compact, diverse habitats alongside other herbivores such as horses and cattle, means that far more European sites can now be considered suitable for bison reintroduction.

Other challenges to bison comeback include a lack of knowledge about the animal, habitat loss and fragmentation, a narrow genetic base that leads to weak resistance against disease, and the lack of a European-wide reintroduction strategy supported by national authorities. We are helping the European bison to come back to natural densities in some key ecosystems, and preparing new areas for the species to expand into. Our largest bison re-introduction project is in the Southern Carpathians in Romania, where we are releasing over 100 bison into the wild. Since most Europeans don’t even know that the bison exists, we are showing it to them, through an intense communication effort. We actively invest in business development around the return of the bison, directly linking bison conservation with local economic benefits. We are of course working closely with the leading bison experts and their organisations from across Europe. We invite all other willing and able partners (land owners, land managers, scientists, forestry officials, National Parks) to join us in this trail breaking endeavor. 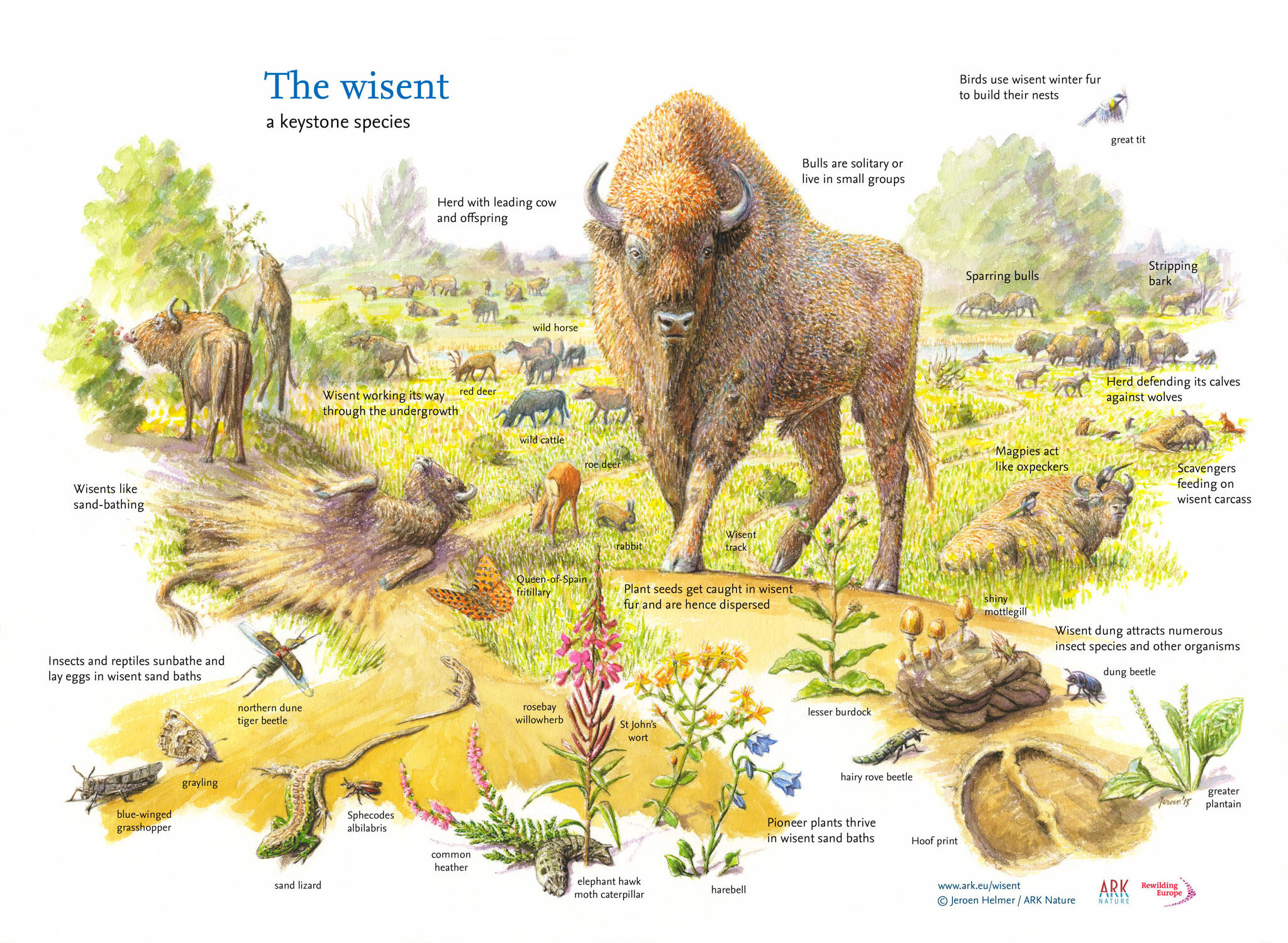 Resembling its North American cousin, the European bison is less shaggy, with a more lanky body shape and curved horns. The heaviest wild land animal in Europe, a typical European bison is about 2.1 to 3.5 metres long, with large bulls occasionally weighing up to 1000 kilogrammes. It can also run at speeds of up to 55 kilometres (40 miles) per hour.

This very impressive animal once used to live all across Europe, except some parts of Spain, Italy and northern Scandinavia. Contrary to popular belief, it is really an animal of the open and semi-open lands, but it also likes forests or woods nearby, for shelter and food during parts of the year. Around 7500 European bison exist today (with about 4000 free-roaming in the wild), with Poland and Belarus as the main strongholds.

The bison primarily is a grass eater, but an important part of their diet also comes from browsing of bushes, bramble and trees. Bison eat up to 60 kg per day and have real impact on the vegetation, keeping open lands open and creating a mosaic landscape. Besides grazing in the front end, it tramples in the middle, wallows in mud holes, rolls in sandpits that it has kicked up, and then fertilizes from its rear end. All of which has great importance to the variety of ecosystems.

It is evident that the European bison is an ecosystem engineer; a keystone species that plays an important role in European landscapes and facilitates a wide variety of other species through its behaviour.

Apart from its important ecological role in European nature, Rewilding Europe believes that European bison can make a positive change for rural development in remote corners of Europe experiencing rural depopulation and land abandonment. This is why we have chosen the bison as one of the flagship species for our rewilding activities.

In 2014, we published the Bison Rewilding Plan 2014–2024, in which we outline our planned contribution to European bison  conservation. The plan describes Rewilding Europe’s vision of establishing viable populations of free-ranging bison herds across Europe, integrated into Europe’s landscapes alongside human populations, supported by improved legislation, community outreach and education, and helping to drive the development of nature-based tourism. Rewilding Europe, in partnership with WWF Romania, has been reintroducing the European bison into the Țarcu Mountains (Southern Carpathians, Romania) since 2014. Since 2016, the European Commission has supported this spectacular reintroduction initiative through its LIFE Programme.

So far more than 80 bison have been brought to the area; with the critical support of local communities, we are gradually building up the free-roaming population. You can read more about this reintroduction on the LIFE Bison website.

In addition to the Southern Carpathians, Rewilding Europe is also reintroducing European bison into the Rhodope Mountains of Bulgaria. In 2019, a herd of seven European bison began roaming free here for the first time since the Middle Ages – these keystone animals, which are already starting to attract visitors, are not only helping to enhance wild nature, but helping in the development of local nature-based tourism.

It is vitally important to select the right animals for reintroduction in terms of genetics. Rewilding Europe and partners are carefully breeding European bison in a number of locations. Together with bison originating from European zoos and wildlife parks, these animals are used for reintroductions.

The European bison that are being reintroduced are all part of the European Wildlife Bank, which provides herds of large herbivores for reintroduction into Europe’s natural landscapes. As of June 2020, 130 bison were in the bank and over 70 bison were roaming free in the Southern Carpathians and Rhodope Mountains rewilding areas, exploring their new home.

To keep track of the European bison reintroduced into the Southern Carpathians rewilding area, GPS collars have been fitted to animals in different herds (mostly leading cows). Bison rangers continually monitor these bison, helping us to better understand their daily and seasonal movements. This allows us to anticipate possible conflicts with local communities (for instance, if animals come too close to villages), as well as enabling bison tracking safaris offered through the European Safari Company.

When it comes to reintroducing animals as physically imposing as European bison, ensuring people can live alongside them in a safe and harmonious way can sometimes be a challenge.

In the Southern Carpathians rewilding area, such a level of coexistence has been achieved through a range of measures – these include the deployment of bison rangers to monitor the animals, regular meetings to address people’s concerns, a video explaining how people should behave when they encounter a European bison, an educational outreach programme involving local schools, and efforts to stimulate the local economy through the development of nature-based tourism.

Bison are a big drawcard for nature lovers and wildlife enthusiasts. In the Southern Carpathians rewilding area, Rewilding Europe wants to use the animals’ reintroduction as a way to stimulate the local economy through nature-based tourism.

Bison tracking safaris, offered through the European Safari Company, are proving increasingly popular, while a visitor center has been established in the local community of Armeniș. Local guides have also set up a fly camp.

Shot in 2019 by award-winning French filmmaker Emmanuel Rondeau, “Zimbrul” (the Romanian for “bison”) is a beautiful, nine-minute documentary showing the reintroduction of the European bison through the eyes of the local people in Armeniș, a community in the Southern Carpathians rewilding area. Portraying the acceptance of bison by people in the area, and their changing perceptions of wild nature, the film demonstrates why the positive involvement of local communities is so critical to the success of rewilding efforts.

Record number of bison calves born in the Eastern Rhodopes

Bison rewilding takes another step forward in the Rhodope Mountains

Bison rewilding in the Southern Carpathians moves into next phase

More species we are focusing on