A new five-year agreement between Rewilding Europe and the Zoological Society of London will see the partners collaborate on multiple actions to advance European rewilding.

Rewilding Europe and ZSL (the Zoological Society of London) have signed a five-year collaborative rewilding agreement (CRA), with both partners leveraging their respective strengths to advance rewilding in a number of key areas.

ZSL, a UK-based conservation and scientific charity of international renown dating back to 1826, is highly experienced in the use of technology in conservation and the development of citizen science. The new agreement builds on a partnership that began in 2019 with the use of ZSL’s groundbreaking Instant Wild platform, which allows online wildlife enthusiasts to collectively identify animals in camera trap photos, thereby providing invaluable data for research and future decision making. This has already seen a wide range of species tagged in imagery from the Central Apennines rewilding area.

Rewilding Europe and ZSL see the opportunity to expand and deepen their collaboration on multiple research, conservation and communications aspects of rewilding in a European context, with the CRA acting as the basis for a range of more specific, formal contracts.

“Both organisations recognise that rewilding can help to address our climate and ecological emergencies and that it can also enhance resilience to diseases such as Covid-19,” says Rewilding Europe’s Managing Director Frans Schepers. “This agreement will see both partners work together to ensure the beneficial impact of rewilding continues to increase.”

“We are very excited about this partnership and the prospect of putting our technical expertise to work supporting rewilding across Europe in response to the climate and ecological emergencies,” says Dr. Andrew Terry, Director of Conservation & Policy for ZSL. “Rewilding offers a sense of hope for the recovery of nature and the rebuilding of strong connections between people and wildlife.”

Accurately assessing how rewilding efforts are affecting landscapes and wildlife populations is critical, both to maintain and build support for rewilding and to inform future decision making. One of the CRA’s key collaborative actions is to understand how wildlife is coming back to the landscapes where Rewilding Europe is working, and the development of technological solutions that will allow such impacts to be sustainably monitored over the longer term.

As part of this action, preparatory work has already begun for camera trapping studies in the Rhodope Mountains and Velebit Mountains rewilding areas. Cameras have been purchased and sampling layouts prepared, in collaboration with local rewilding teams. In both areas, grids of 40 cameras will be deployed and moved around every 30 days to build up a reliable dataset of images. Such studies may eventually be extended to other rewilding areas.

ZSL will initially train members of local rewilding teams on the deployment and management of camera trap grids, leaving ZSL to focus on analytical work. The latter will be carried out by a small number of students, who will use the analysis to complete their master’s degrees.

Under the terms of the new agreement, ZSL and Rewilding Europe will also continue to work together on Instant Wild, exploring the possibility of uploading images from other rewilding areas to the platform. 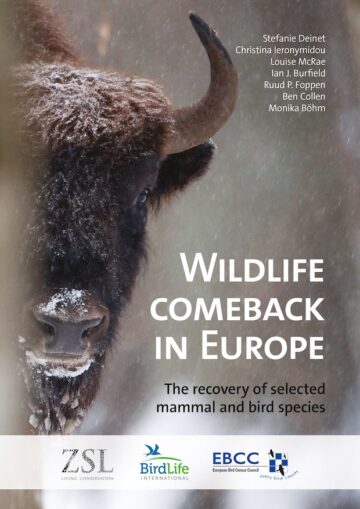 As viewers of “Europe’s New Wild” – the stunning six-part TV series co-produced by Rewilding Europe – will have seen, many wildlife species have made a spectacular return across Europe over the last four decades, helped by factors such as increased legal protection, reintroductions and other population support measures, corridor creation, and an ever greater willingness and desire by Europeans to live alongside wild animals.

Back in 2013, Rewilding Europe partnered with ZSL (together with Birdlife International and the European Bird Census Council) to produce a report titled “Wildlife Comeback in Europe“, a state-of-the-art, science-based, peer-reviewed overview of the comeback of a number of European wildlife species. These included mammals such as the European bison and grey wolf, as well as birds such as the griffon vulture and white-tailed eagle.

As part of the new agreement, ZSL has been co-commissioned (with the same partners as before) to produce an updated version of this report. This is scheduled for publication in 2022, with WWF Netherlands, Arcadia and the Dutch Postcode Lottery providing funding. More wildlife species will be included this time around, with more emphasis placed on the underlying mechanisms for their comeback. A series of associated academic papers will also be published.

“Some of the information in the first report dated back to 2005, so this is an exciting and timely update,” says Frans Schepers. “From bears and wolves to beavers and golden jackals, a lot of species have continued their spread across Europe over the last 15 years.”

While increasing tolerance and better legal protection are having an effect, factors such as unsustainable agricultural practice, a lack of connectivity in European landscapes and the unprotected nature of many rural landscapes means that many European ecosystems are still lacking keystone species and biodiversity is still declining. The overall message is that wildlife species are resilient and will make a comeback in Europe, if we create the right conditions for them to do so.

What do rewilding and art have in common?