“The Aurochs – Born to be Wild”, a unique book about the comeback of this European icon was officially launched today, October 6 at a special event during WILD 10, the World Wilderness Congress in Salamanca, Spain, organised together with the Taurus Foundation and CoalitionWILD. 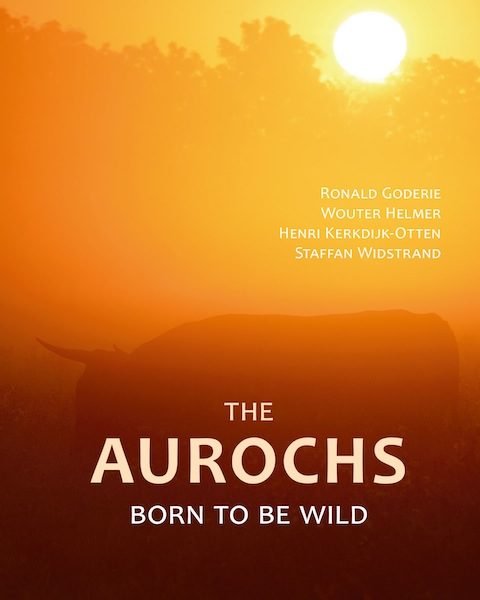 The aurochs was a keystone species in Europe’s ecosystems, but it also became man’s most valuable animal, as the ancestor of all the 1 billion cattle in the world. Europe’s history is very closely connected to the aurochs. Not only because of the Greek myth of the founding of Europe, where the God Zeus in the shape of a bull seduces and kidnaps a beautiful virgin princess called Europa from the Middle East, and brings her to Crete – a symbolic way to explain that the taming of these wild cattle was one of the most important steps in the economic history of our continent. Ever since, domesticated cattle have been the most valuable of all animals for mankind.

Often forgotten, however, is that the wild aurochs also played a key role for Europe’s biodiversity, greatly impacting on the vegetation where it lived. Hundreds of plant and animal species developed in co-evolution with the vast herds of these Europe’s heaviest land mammals and other large grazers. For hundreds of thousands of years Europe’s ecosystems benefited from and were shaped by the strong influence from wild and free living herds of aurochs, together with other large herbivores, like European bison, wild horses, deer or ibex.

Bringing back a legend

The aurochs stands at the very roots of the whole idea of our continent but was sadly driven to its extinction by man. Luckily, it can also be brought back by man. In 2008, the Taurus Foundation decided to give the re-breeding of the aurochs a serious try. It has since grown into a joint effort together with Rewilding Europe and the Dutch organization ARK Nature. The end result will look like an aurochs, live like an aurochs, behave, eat, mate, defecate and eventually die like an aurochs. For the time being, this animal will be called the Tauros, the Greek word for the bull.

The 160-page book is about the aurochs and the plan to bring it back: the Tauros Programme. After reading this book, you will never look at cattle in the same way. It starts at a time in Europe before man was here: a continent with big herds of large herbivores, in a far wilder landscape than today. This was the realm of aurochs, the King of the Wild, Europe’s heaviest land mammal after the rhinos and mammoths had disappeared. The original wild animal was hunted to its extinction in 1627, but its genes are still alive and kicking. Several old cattle breeds are proven to still be very close to the aurochs, genetically. The Tauros Programme will use these breeds to breed the animal back, build wild populations and in the end release them in rewilded areas. ‘The Aurochs – Born to be Wild’ tells this story: with text and fantastic photos.

An aurochs bull stood up to 180 cm tall and due to its long legs and relatively slender build it was an agile animal. Calves were born with a chestnut colour, bulls changed their coat colour after a few months into a very deep brown or black, with a whitish eel stripe running down the spine. Cows retained their reddish-brown colour. Typical for both sexes was the lightly coloured mouth part. Adult aurochs could give big predators such as wolves a serious match.

Their long and thick horns were together with the animals bulk and speed formidable means of defence against any outside threat. The aurochs once roamed across vast areas of Europe, Northern Africa and Asia. Lots of bone remains have been found across all of Europe, except Iceland, Ireland and Northern Scandinavia.

It was an impressive animal, perfectly adapted to the diversity of landscapes it inhabited. The aurochs seem to have ranged from open steppes, semi-deserts and savannah-like landscapes to marshlands, forests and mountains, also up above the tree line, and was able to live in most ecological niches encountered in Europe except the boreal forest, pretty much the same as where domestic cattle can live today.

The major reason why it disappeared was because man hunted it to extinction. First for meat, but when man later brought in domestic cattle, there was also an intentional extermination because of competition from the aurochs over forage in the grazing lands. The last aurochs individual died in Jaktorów in Poland 1627.

The book can be ordered via Rewilding Europe’s web site or by sending an e-mail to info@stichtingtaurus.nl or info@rewildingeurope.com. The price is EUR 29.95 plus shipping costs.

Tauros herd transported from Taurus Foundation to the Auerrind Project