On the face of it, vultures aren’t the most endearing birds. But closer investigation reveals just how amazing they really are, and why their conservation is so important.

Disgusting yet intriguing. Endangered yet immensely beneficial. Clumsy on land yet majestic in the sky. Vultures might be paradoxical creatures, but they are nevertheless loved by wildlife enthusiasts and photographers the world over. Yet most people don’t really appreciate how amazing these birds really are, and the critical role they play in the ecosystems where they live.

Let’s face it, vultures don’t have the greatest habits. When groups of birds locate a carcass, the ensuing feeding frenzy is generally a gorefest. Most of us have seen documentaries from the African savannah, a wake of vultures lurching, lunging and bickering over the remains of a zebra or wildebeest. When one bird pulls its head out of the carcass, it turns to face to camera, covered in blood and guts.

As outlined in the episode of Europe’s New Wild titled “The Scavengers Return“, vultures are nature’s critical clean-up crew. As scavengers, they seek out the carcasses of dead animals as their primary source of food. Vultures, along with a variety of insects and other scavengers, feast on these carcasses, helping to eliminate toxic bacteria and diseases. Vultures have such powerful digestive systems that they are even able to digest botulism and completely eliminate it from the environment (see below). In some species, the beak is exceptionally strong and heavy for tearing hide, muscle, and even bone.

Vultures are what is known as keystone species – these are animals or plants that help to define entire ecosystems. Without its keystone species, the ecosystem would be dramatically different or cease to exist altogether. Every vulture species (four are found in Europe: griffon, cinereous/black, Egyptian and bearded) has a different scavenging role; while griffon vultures, for example, take care of most of the meat and intestines, cinereous (black) vultures eat the tendons and other harder pieces of the carcass, and Egyptian vultures take smaller remains. Bearded vultures (lammergeiers) are famous for living almost entirely off bone.

Vultures, like certain other bird species, remain with their partner for life and are known to be devoted parents. Most vultures inhabit open country, often roosting in groups on cliffs, in tall trees, or on the ground.

Vulture chicks are raised by their parents until they are ready to fly, taking to the air for the first time around four to five months after birth. As is common with long-lived animals (vultures can live up to 40 years in captivity), vultures don’t reproduce rapidly. They may have only one or two chicks at a time and may breed annually or once every other year.

As ungainly as they are on land, vultures are majestic in the air and are able to sustain flight for long periods without flapping their wings. They take advantage of updrafts produced when the wind blows over hills and mountain ridges or make use of rising columns of warm air called thermals.

Vultures stay within thermals by flying slowly in tight circles. They typically have short, broad wings and a low wing loading (ratio of bird weight to wing area) that allows them to remain aloft and to be highly manoeuvrable at slow speeds. When they are in flight they extend their flight feathers (at the end of each wing), which reduces wingtip turbulence, lowers the stalling speed of the wing, and allows the bird to remain aloft at a slower speed.

It is because of their role as keystone species, and an essential part of local food chains, that Rewilding Europe is supporting the comeback of vultures in many of its rewilding areas. This support is in the form of a range of measures – from anti-poison dog units and GPS tagging (to better understand and protect the birds) to artificial nest building and increasing the availability of wild carcasses for the birds to feed on. Many of these measures can be seen in the “The Scavengers Return“.

The return of the birds also supports the development of local wildlife watching businesses, which helps people to benefit from nature recovery too.

“All four vulture species used to live in most of Europe, but were exterminated mainly through the use of poison,” says Deli Saavedra, Rewilding Europe’s Rewilding Area Coordinator. “We are trying to bring back the species and increase the numbers to our rewilding areas, in order to recover the scavenging in nature, an essential ecological process.”

Vultures in the spotlight 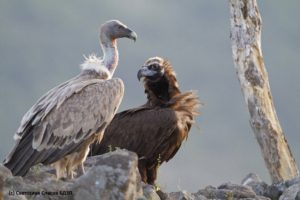 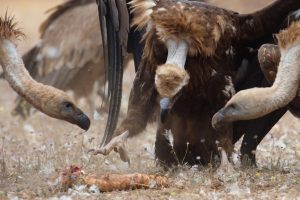 Vultures are carnivorous and eat carrion almost exclusively. They prefer fresh meat but can consume carcasses that may have rotted so much that the meat can be toxic to other animals. This helps to prevent the spread of diseases from old, rotting corpses. 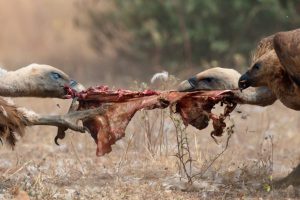 The stomach acid of a vulture is significantly stronger and more corrosive than that of any other animal. This allows them to feed on rotting carcasses that may be infected with dangerous bacteria. 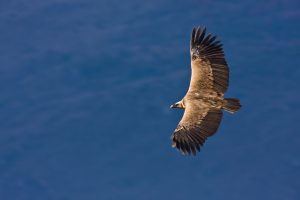 It is a myth that vultures circle dying animals waiting to feed. Powerful fliers, they soar on thermals while they look for food – when they locate a carcass by smell, sight (they have excellent vision), or the sound of other birds feeding, they approach it quickly before other predators find it. 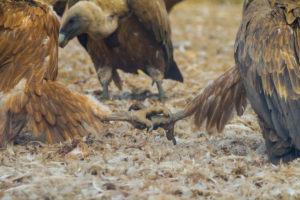 Vultures urinate on their legs and feet to cool off on hot days, a process called urohydrosis. Their urine also helps kill any bacteria or parasites they’ve picked up from walking through carcasses or perching on dead animals. 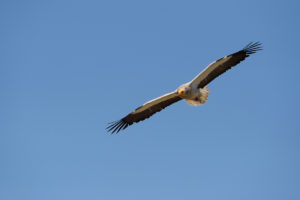 Vultures enjoy their own holiday, International Vulture Awareness Day, which is celebrated on the first Saturday of each September. Hundreds of zoos, aviaries, nature preserves, and bird refuges worldwide participate each year with fun and informational activities about vultures in helping everyone learn just how interesting and valuable these birds are.