The Border Meuse initiative, which kicked off 30 years ago in the Netherlands, has seen river restoration deliver a triple win for nature and people. It demonstrates perfectly how rewilding can make socio-economic as well as ecological sense. 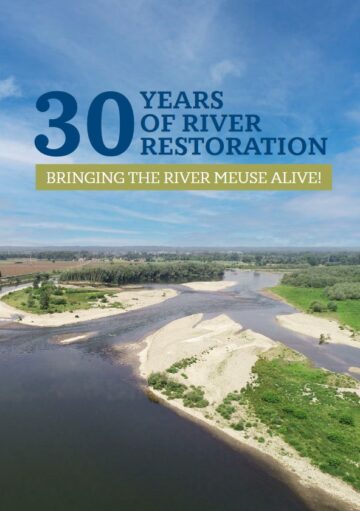 In today’s complex world, working with nature – rather than against it – can help us overcome many of our most pressing problems. Restoring natural landscapes damaged by human exploitation is one of the most effective and cheapest ways of addressing challenges such as climate change and biodiversity decline, while simultaneously providing a wide range of other socio-economic benefits. In this way, rewilding can make socio-economic as well as ecological sense.

A new publication, entitled “30 Years of River Restoration: Bringing the River Meuse Alive!“, details a game-changing initiative that has delivered flood protection, ecological restoration and economic development in the Netherlands and Belgium: the Border Meuse (or “Grensmaas”) Project.

The River Meuse has its source on the Plateau de Langres in the Bourgogne region in France, making a 950-kilometre journey northward through France, Belgium and the Netherlands before draining into the North Sea. The restoration of a 45-kilometre section of the River Meuse (known as the Border Meuse), which runs along the border between the Netherlands and Belgium, is the perfect example of how working with nature offers multiple benefits.

The so-called Border Meuse or “Grensmaas” Project – which began 30 years ago and is the largest initiative of its kind in the Netherlands and Europe – has delivered on three major fronts: reduced flood risk, healthier and more diverse nature, and the commercial benefit of both gravel extraction and nature-based economic development.

“Over the last three decades, the restoration of 45 kilometres of the River Meuse between Maastricht and Roosteren has been a triple win for nature and people,” says Rewilding Europe’s Managing Director Frans Schepers, who worked on the Border Meuse Project for 12 years following its approval. “The success of the entire initiative shows how building with nature is frequently a viable and preferable option when it comes to large-scale hydroengineering projects.”

The stretch of the River Meuse along the border between the Netherlands and Belgium is fast flowing, meaning it is unsuitable for shipping. It is also characterised by extremely deep beds of gravel – these are unique in the Netherlands, meaning they have long been mined for construction. But by the late 1980s, social resistance to gravel extraction – which had created a lunar landscape pockmarked by deep gravel pits and vast areas of open water – was increasingly strong. Constrained by lateral dykes, the river itself had become very narrow, with significant erosion of the river bed.

“It was at this point that Plan Stork was first presented in the Netherlands,” explains Schepers. “Initially focused on the River Rhine, this was a progressive new vision to combine nature, clay extraction for the brick industry and flood protection along Dutch rivers. People then began to think about applying the concept to the Border Meuse.”

By the early 1990s the Border Meuse Project had been conceived, involving limited shallow gravel extraction, combined with a broadening of the river and restoration of nature. The term “green for gravel” was coined to summarise the restoration process, which received further backing following severe flooding in the Netherlands in 1993 and 1995. The project subsequently became part of the Delta Plan for Large Rivers – a major initiative of the Dutch government.

The restoration works on the Belgian side started earlier than on the Dutch side, and included a number of critical sites for the ecological connection and river dynamics. Where possible, gravel was also added to the broadened river bed. The gravel augmentation from the Flemish banks amounts some 400,000 m3 of gravel.

The transboundary cooperation, both during the execution of the works, but also the 30 years of monitoring impacts, is really unique and valuable. The result is a transboundary River Park unique in Europe, that can further grow to some 4,500 hectares if additional areas will be connected within the larger river landscape.

Value for nature and people

The restoration of the Border Meuse, which has been almost exclusively funded by commercial gravel extraction, will continue through till 2027. It has seen large areas surrounding the river lowered, and the river itself broadened with banks of sand and gravel, side arms, varied shorelines, and areas of grassland and woodland. This has created a dynamic, braided river landscape that is allowed to flood and shift course naturally.

This rewilding process has led to the spectacular natural recovery of both animals and plants. Species such as beavers and black poplar have recolonised the area, while the introduction of free-roaming herds of Konik horses and Galloway cattle has enhanced natural grazing, which in turn has increased biodiversity. The south-north flowing Border Meuse has become an important ecological corridor linking the upstream French and Belgian sections of the River Meuse, with the Meuse Valley River Park established in 2006 and new rewilding areas further downriver in the Meuse Delta. The park itself is now a member of Rewilding Europe’s European Rewilding Network.

Local residents and visitors have also benefitted from the Border Meuse Project, with signposted routes providing access for cyclists, walkers, anglers and canoeists. The local economy has received a significant boost from nature-based tourism, with direct revenues estimated at more than 25 million euros every year, while the flood risk to adjacent villages and towns has also been significantly reduced. This was demonstrated during serious flooding in Western Europe in July 2021, when dozens of people died and huge economic damage was caused in both Belgium and Germany (on the Meuse and Upper Rhine). Thanks to its broadened river bed, the Border Meuse, which was also heavily swollen, coped with high water levels very well, without any serious casualties and little economic damage.