Rewilding Oder Delta team prepare for the return of elk

The elk is expanding its range westward in Poland, with individuals now crossing the border into Germany on a regular basis. In an increasingly wild Oder Delta, the local rewilding team is laying the groundwork for the comeback of this impressive species.

Divided between Poland and Germany, the 450,000-hectare Oder Delta is one of Europe’s most important crossroads for biodiversity. Boasting extensive areas of riparian forest, wetland, grassland and broadleaf woodland, the delta and its environs are a hotspot for flora and fauna, supporting populations of animals such as wolves, elk (also known as the moose in North America), European bison and Eurasian lynx. These species are not only settling in the delta and the surrounding region of Western Pomerania, but using the area to migrate from east to west as they recolonise parts of their former range. 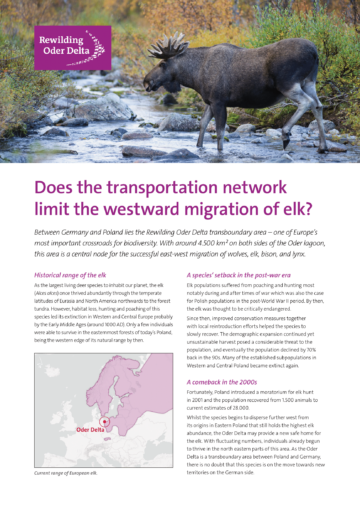 While the Oder Delta hosts a small population of elk, the recent expansion of transportation networks in the area poses a significant threat. These networks fragment habitat and may also act as barriers to migration. The Rewilding Oder Delta team has just released a factsheet as the first step in understanding the local movement of the animals and creating an environment which is more supportive of the recolonisation process. Information about elk and their westward expansion will also feature on the new and initially bilingual (Polish/German) Rewilding Oder Delta website.

“Gaining a better understanding of elk migration will enable the team to reach out to and educate local communities in the rewilding area, who are typically unaware they are living (or could soon be living) alongside these magnificent animals,” says Rewilding Oder Delta team leader Peter Torkler. “It also means residents are prepared for the possibility of encountering them.”

The fall and rise of an iconic species

As the world’s largest living species of deer, elk once ranged across large parts of Eurasia. But by the Middle Ages (around 1000 AD), hunting, poaching and habitat loss had seen the animal disappear from most, if not all of Western and Central Europe, with a few individuals clinging on in the forests of eastern Poland. While the animal made a comeback in Poland after the Second World War, populations again suffered a decline due to unsustainable hunting and poaching in the latter half of the twentieth century.

Since the hunting of elk was finally banned in Poland in 2001 the country’s population has grown from 1500 to around 28,000 animals, with the species gradually migrating westward from its stronghold in the east. If this trend continues elk are likely to cross the German border permanently in the near future as they recolonise new territory in eastern Germany. The natural return of elk shows that the Oder Delta, which is becoming increasingly wild as a result of rewilding efforts, is indeed a favourable crossing point for many species.

Elk are one of the Oder Delta’s so-called “Big Seven” group of iconic animals – the others being Atlantic sturgeon, grey seal, beaver, white-tailed eagle, wolf and European bison. Some of these have settled in the area and are starting to boost nature-based tourism. As an important keystone species, elk will also feature in the updated wildlife comeback report commissioned by Rewilding Europe.