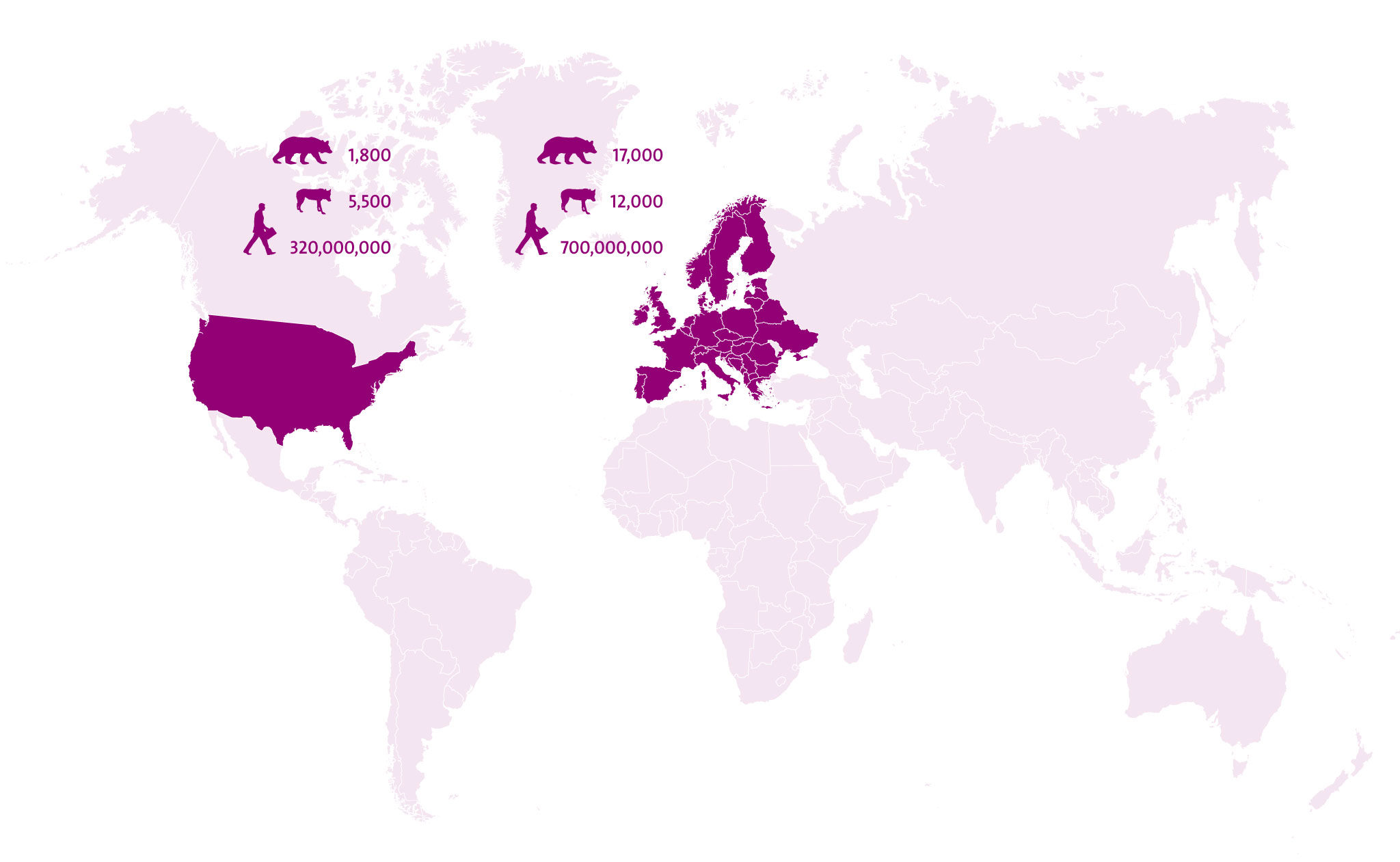 With its large cities, modern infrastructure network and extensive areas under intensive agriculture, Europe seems an unlikely place for a large carnivore comeback. But despite this, a 2011 study commissioned by Rewilding Europe from the Zoological Society of London (and partners) found five European carnivore species – the brown bear, Eurasian lynx, wolverine, grey wolf and golden jackal – all expanding their range. In many areas of the continent, these animals are surviving and increasing outside protected areas. This comeback, especially with regard to wolves and bears, shows the amazing resilience of these animals; populations are returning in a human-dominated landscape. 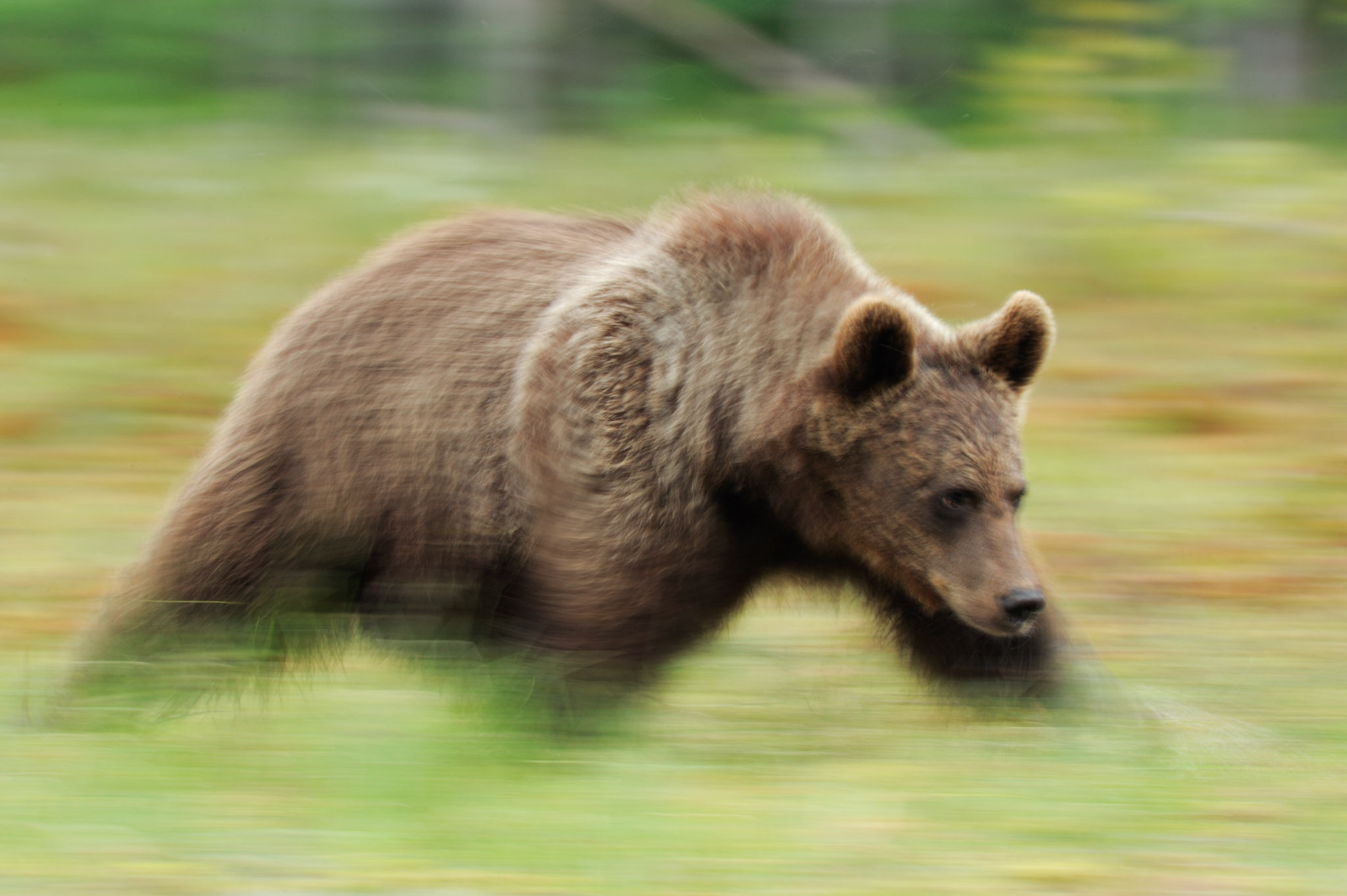 Apex predators such as bears and wolves can be amongst the hardest animals to conserve, especially on a continent as developed as Europe. These animals require large areas of land to roam and a sufficient prey base to survive and flourish. The average home range of a male brown bear, for example, can be 1,000 square kilometers or more. This has always made them difficult and expensive to protect.

Compounding the problems associated with these ecological demands, carnivore conservation typically involves contentious social issues too. The threat of conflict with humans, combined with the frequently negative portrayal of apex predators in everyday society, often makes carnivore conservation programmes highly controversial. It is the magnitude of these challenges that makes the ongoing comeback of many of Europe’s large carnivores even more remarkable.

While carnivores are coming back on their own, Rewilding Europe is supporting them by creating a positive environment for their continued comeback. We work to reconnect people with such animals, reduce existing and perceived conflicts and develop opportunities for sustainable business linked to large carnivores – all to promote coexistence with these animals. Research in bear dens in Croatia, to protect the hibernation but also breeding sites from disturbing forestry activities. Study on golden jackal in Danube Delta, to analyzed and resolve the perceived problems to local livelihoods. Developing corridors, to connect protected areas such as in the Central Apennines for the Marsican brown bears. Restoring Iberian lynx habitat, through natural grazing to facilitate suitable habitat for rabbits and the lynx itself. 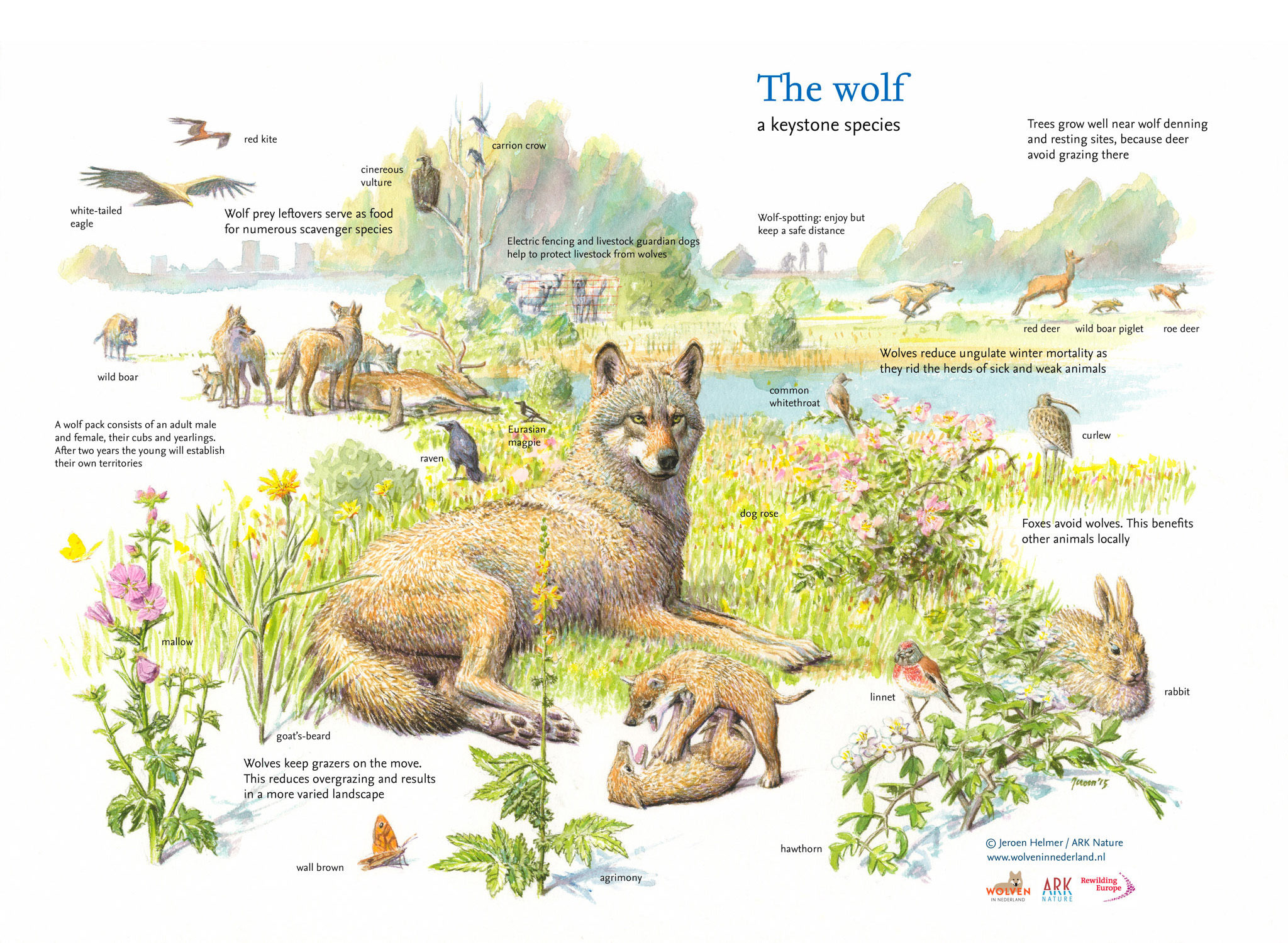 The wolf – a keystone species

Perhaps the most remarkable comeback is that of the wolf. Spreading outward from Poland and the Carpathians, packs and individuals have now been spotted as far west as the Netherlands, Belgium and Luxembourg. Just two decades ago there were no wolves in Germany.

Now experts estimate there may be as many as 60 packs and 13 pairs without pups (November 2017), in France the first pups since a long time were born in 2013. The first wolf for Belgium since 200 years was seen in January 2018 (after a first camera trap picture in 2011), while in the Netherlands there are now several observations of different animals since 2015. In total, the wolf population in Europe is estimated to be 12,000 animals (excluding Belarus, Ukraine and Western Russia).

The wolf is a so-called apex predator and plays a key role in European ecosystems, in particular because of the ‘ecology of fear’ that wolves bring towards prey species. This has a positive impact on the landscape.

“If wolves could swim to London, they would.
Despite the presence of man, these animals are thriving and filling a niche.” Large carnivores in our rewilding areas

In all of Rewilding Europe’s pilot areas, carnivore species play an integral role in shaping the local conservation setting. Six species are present in our eight rewilding areas: brown bear, grey wolf, Eurasian lynx, Iberian lynx, wolverine and golden jackal; the first two species are the most common ones. In the Central Apennines, there is a special subspecies of the brown bear: the Marsican brown bear. The table shows which species are present in which area, and if they are a regular species (

) or if they only occur occasional ( 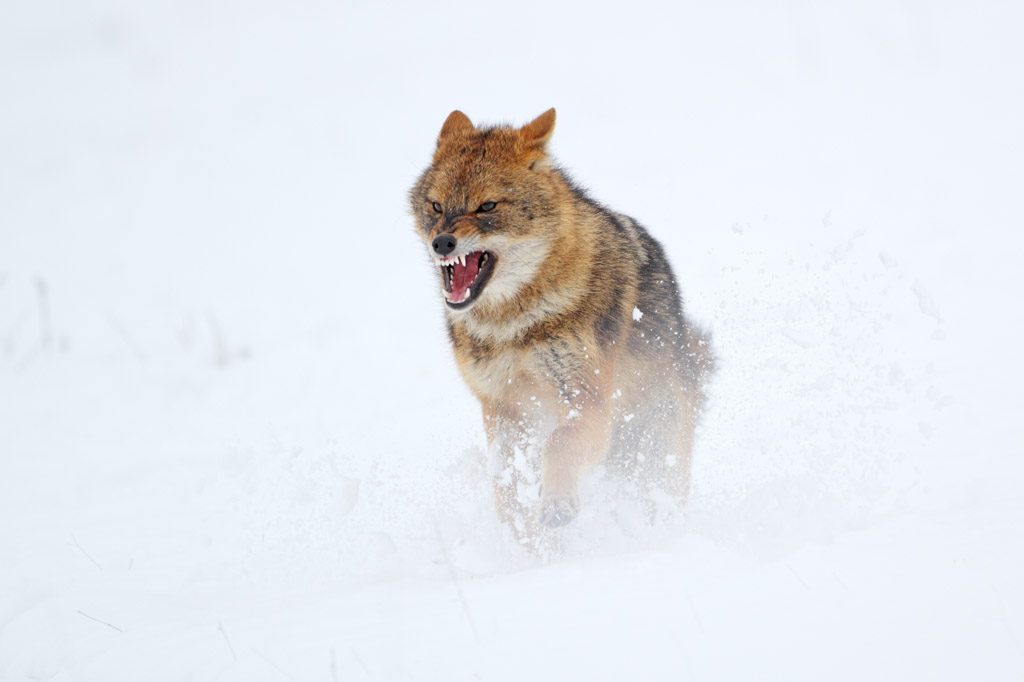 The golden jackal, often overlooked as a large carnivore in Europe, is currently staging a spectacular westward expansion of its range. From a stronghold in south-east Europe, it has now been sighted in Estonia, Germany, Denmark and the Netherlands. It is a highly adaptive species that is finding its way in our modern European landscape. It is particularly common in the Danube Delta, where it likes the wetland habitats with abundant food.

See also ‘Days of the Jackal’ about the issues around the presence of the golden jackal in the Romanian Danube Delta. 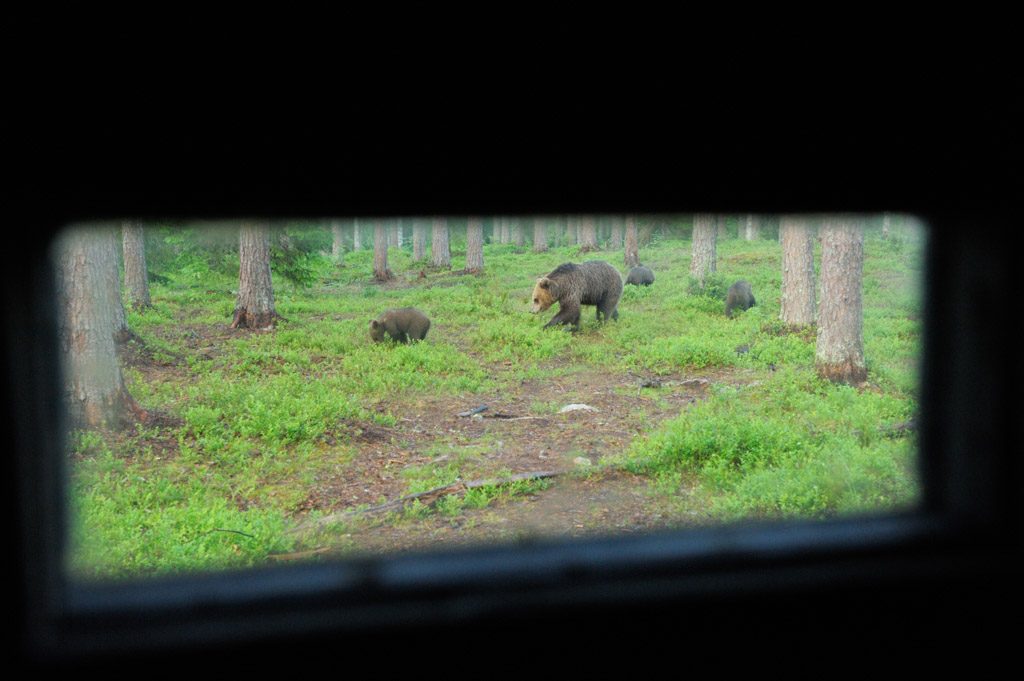 The arrival of large carnivores in European habitats where they were previously absent is having both an ecological and social impact. As these animals come into closer contact with humans, some conflict is inevitable. In the past, predation of livestock by carnivores was a major contributory factor in their decline.

Such predation is often a symptom of depleted natural prey populations. The weakest link in the carnivore comeback is the absence of large herbivores. Restoring prey populations by restocking or changing hunting regimes is therefore crucial.

This is why Rewilding Europe is working hard to reintroduce or restock animals such as red deer and fallow deer, in areas such as the Rhodope Mountains.

Despite the challenges that wolves bring as neighbors that are sometimes not easy to live with, they also bring new opportunities. An example is carnivore watching tourism that is now emerging in different locations in Europe.

In the Central Apennines, so-called ‘bear ambassadors’ have been working since 2015 to mitigate human-bear conflicts and create a better understanding of people towards the Marsican brown bear, a rare subspecies of the brown bear living in this area. Its population, some 60 animals currently, is under threat and there is a need for range expansion through corridors that connect the main population with other protected areas, which are potential new bear habitat. As of 2018, the work on the species is being taken forward through a new partnership with Salviamo l’Orso, a local NGO focusing on protection of the Marsican brown bear.

In 2016 and 2017 we have been studying the attitudes of local people towards the golden jackal in and around Sfântu Gheorghe, a village in the the Danube Delta. The goal was to record the presence and behaviour of jackals and find out how the local population of Sfântu Gheorghe perceives the species, and the reasons for those perceptions. Although it seemed that many people held a negative view of the species, there are signs that the growing presence of the jackal is being tolerated and accepted. This offers good prospects for preempting human-jackal conflict and long-term jackal conservation. It also provides a base for development of a local nature-based economy based on wildlife watching opportunities.

In 2016 and 2017, researchers from Zagreb University completed a survey to map out hibernation sites and dens of brown bear in Velebit Mountains, where the species is present in good densities. This helps to inform forest and wildlife management as to where certain activities should be avoided, to not disturb the bears in these critical periods of their life.

In several of our rewilding areas, we work to increase the prey base for large carnivores, as their numbers and densities are far below natural. For example, we are releasing red deer and fallow deer in Rhodope Mountains, that will ultimately also benefit vultures and other scavengers. In Velebit, we are restocking red deer for wolf and Eurasian lynx and have managed to get a moratorium on hunting of red deer and Balkan chamois, as part of the creation of a new wildlife reserve.