The new partnership recognises Rewilding Europe’s pivotal role in promoting rewilding as a mainstream approach to ecosystem restoration. As we embark on the UN Decade, it underlines the need to scale up rewilding now. 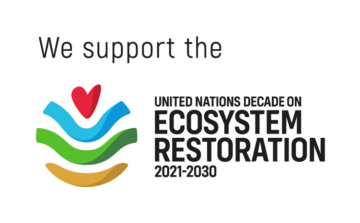 Rewilding Europe has become an official supporting partner of the UN Decade on Ecosystem Restoration (hereafter the UN Decade). The partnership, which sees Rewilding Europe join a select group of organisations, underlines the added value of our rewilding mission and work to promote rewilding as a mainstream approach to landscape-scale ecosystem restoration.

The UN Decade, which will launch on World Environment Day (June 5) and run through to 2030, aims to prevent, halt and reverse the degradation of ecosystems on every continent and in every ocean.

As a supporting partner, Rewilding Europe will continue its efforts to promote and accelerate the restoration of ecosystems through rewilding, while helping others to do the same.

“We are delighted with this new cooperation and the recognition that it brings,” says Rewilding Europe Managing Director Frans Schepers. “Rewilding at scale can absorb enormous amounts of carbon, restore natural systems, and make the planet a better place to live. But we must act now – using rewilding principles and deploying legally binding targets – to ensure its positive impact is delivered at the necessary scale over the next decade and beyond.”

This year is a critical year for nature recovery. In addition to the launch of the UN Decade, the COP 15 biodiversity conference will take place in China in May, while the COP 26 climate conference will be held in Scotland in November. The biodiversity agenda is increasingly linked with the climate agenda – which is how it should be as two issues are intrinsically linked.

Against the backdrop of biodiversity decline, rising global temperatures and the ravaging impact of Covid-19, there has never been a greater awareness of our need for nature and the wide range of benefits it provides – from clean air and fertile soil to the locking up of atmospheric carbon and resilience to disease. Yet simply protecting our remaining nature is not enough, which is why nature recovery needs to be prioritised far more on both the climate and biodiversity agendas.

As we look towards 2030, the only way to ensure a healthy and sustainable future for the planet is to rewild large areas, reducing human control and letting nature take care of itself. Natural factors and processes generated and maintained the Earth’s rich biodiversity for millions of years before the advent of human society, even through periods of climate instability. As such, rewilding reinstates the only proven, effective, long-term mechanisms with the potential to recover and maintain biodiversity on a global scale.

Reasons to be optimistic

The challenge of upgrading nature over the next decade is undoubtedly huge, but there are reasons to feel both hopeful and inspired. Covid-19 has driven home the need to recover nature and instilled a growing desire to “build back better”.

Rewilding is increasingly seen as an immediate and effective way of tackling climate change and biodiversity loss at the same time, with growing policy support from the likes of the European Green Deal, EU Biodiversity Strategy for 2030, as well as the commitment to a Restoration Directive, complete with legally binding targets for restoration. And funding for rewilding is also on the rise, with a growing number of businesses, investment institutions and philanthropists taking financial decisions that help to restore nature.

In addition to the above, rewilding is resonating ever more strongly with the younger generation, who recognise that nature and biodiversity are essential for addressing climate change and the guarantee of a healthy and sustainable future. And last but not least, many wildlife species are now making a comeback in Europe, helping us to reforge new human-wildlife relations and proving that nature is resilient and will recover if we create the conditions for it to do so.

The last year has made it clearer than ever that we urgently need to change course and give nature the chance to upgrade itself. Rewilding presents a game-changing opportunity to restore nature and create healthy, functional, resilient ecosystems, with huge potential for this approach to be rolled out across Europe.

“Being an official partner of the UN Decade will help Rewilding Europe to scale up and accelerate practical rewilding across Europe,” says Frans Schepers. “From big business, financial institutions and policymakers to NGOs, scientists and everyday citizens, everyone can play their part in taking nature recovery to the next level. It’s in everyone’s interest that we start today and think big.”

Rewilding Europe is a founder member of The Global Rewilding Alliance, which is an official Restoration Implementer of the UN Decade. Officially launching on March 20, the alliance now comprises more than 100 organisations from across the world involved in the practice and promotion of rewilding.

Healing the planet: rewilding and the COVID-19 pandemic

May 4, 2020
Manage Cookie Consent
We use cookies to optimise our website and our service.
Manage options Manage services Manage vendors Read more about these purposes
View preferences
{title} {title} {title}
Support the vultures