New EU funding to support living with bears in Europe

Coordinated by Rewilding Europe, 12 partners from Italy and Greece are kicking off a new EU-funded programme that will support living harmoniously with bears in Europe. The LIFE Bear-Smart Corridors initiative will support the development of a network of communities in coexistence corridors. 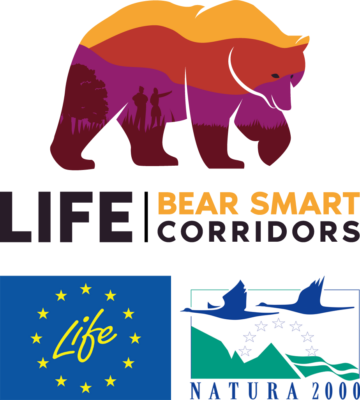 Building on progress made through the establishment of Bear-Smart Communities within the Central Apennines rewilding landscape, the European Commission-funded LIFE programme will scale up and enhance efforts to develop a network of coexistence corridors in both Italy and Greece.

The programme officially kicked off in March when representatives from the partner organisations met in Pettorano sul Gizio in the Apennines to discuss goals and actions.

The efforts to improve human-bear co-existence aim to reinforce the recovery of Greek brown bears and expand the range of the rare Marsican subspecies in Italy. In both countries, population recovery is currently limited because expanding bear populations are facing challenges outside the protected areas.

Snares, poisoning and illegal killing is an ever-present threat, and wandering bears entering villages in search of an easy meal from bins, apiaries, orchards chicken coops and farms can trigger conflict. Efforts – such as measures for damage prevention, removing potentially fatal hazards like water wells, education, and empowering local communities to become part of the brown bear’s story of resurgence – aim to create safe corridors for bears.

“In the long-term, the conservation of the species is determined above all in the regions outside the core area of the existing population, where there is highly suitable habitat connected by ecological corridors. From this, new breeding animals can settle, bolstering the wider population.” Creating favourable conditions for the bears and people within these corridors will be achieved through the formation of the Bear-Smart Communities.

Covering 22 Natura 2000 sites in the Central Apennines and a further 6 in Greece, Bear-Smart Corridors will give the bears the space they need to create genetically diverse, self-sustaining populations – while indirectly benefitting many other species.

The strategy underpinning the concept of these bear-smart communities has three elements:

By gaining the trust and support of residents and other stakeholders, coexistence corridors can be established, supporting a safe environment for bears. Over the course of the five-year initiative, LIFE Bear-Smart Corridors will act as a best practice example for human-bear coexistence, with the ultimate aim of rolling out the Bear-Smart Communities concept across Europe.

The core area for the critically endangered Marsican brown bear is the Abruzzo, Lazio and Molise National Park, where the population was estimated in 2014 to number between 47 and 61, following genetic sampling. The mountainous and largely forested park has now reached its full carrying capacity, and so, population growth can only occur through range expansion. Marsican brown bears have vast ranges of up to 300 km2.

“We know that the future of the Marsican brown bear is connected to its capacity to extend its distribution range and colonize new territories. The scientific research tells us that the Apennines are rich in ecological areas able to host a vital population of about 200 bears” says Luciano Sammarone, Director of the Abruzzo, Lazio and Molise National Park.

In the peripheral areas of the park, bear numbers are low – restricted to a few wandering males and, sporadically, breeding females – highlighting how important safe corridors are for the future survival of the sub-species.

Increasing levels of tolerance and understanding for the brown bear in the communities who live alongside them is critical. As a species that depends on being able to roam freely across expansive territories, the brown bear needs to meet human acceptance on a large scale. With the new EU funding, Rewilding Europe and all partners involved can support the European bear population’s growth by preparing communities for their arrival and preventing conflict before it arises.

“The involvement and contribution of local communities and stakeholders are decisive for every stage of the initiative – and beyond its conclusion” says Dr. Tasos Hovardas from Callisto. “LIFE Bear-Smart Corridors aims to engage local communities in establishing Bear-Smart Communities in the two Greek areas of Trikala-Meteora and Amyntaio. Local stakeholders will be approached through a qualitative and quantitative study, to outline the major challenges to human-bear coexistence. This input will be then analyzed and processed to establish Bear-Smart Communities.”

The creation of at least 18 Bear-Smart Communities – 16 in Italy and 2 in Greece – and additional corridors, will magnify our efforts to nurture this acceptance, with enterprise actions being developed alongside mitigation practices to enhance the image of what is for many people already, an emblematic species of the Central Apennines, Trikala-Meteora and Amyntaio; as well as a source of local and national pride.

“We are already making progress with the development of a Landscape Business Plan that will involve a range of stakeholders and entrepreneurs in workshops going forward. This new LIFE initiative gives us a great platform to scale-up existing enterprise work, and suitable businesses in the Central Apennines are currently being identified”, says Valerio Reale, Rewilding Apennines’ Enterprise Officer. “The entrepreneurs target is crucial in order to involve more community members in human-bear coexistence practices.”

Another pivotal part is the role of volunteers. “This initiative will give us the opportunity to involve a group of highly motivated volunteers who will be trained to contribute significantly in carrying out the best practices of human-bear coexistence, reducing threats to this flagship species of the Central Apennines” says Mario Cipollone, Rewilding Apennines’ Team Leader.

A vital component of the new initiative will be the ongoing knowledge exchange and sharing of expertise between Italian and Greek partners, as Mario Cipollone, Rewilding Apennines’ Team Leader highlights.

“We have already enjoyed a useful exchange of experiences and viewpoints at the meeting. It was a great opportunity to explore methodologies and firm up a framework for action. We plan to host the partners again, and also look forward to visiting the Greek areas in the future. We may be separated by the Mediterranean Sea, but the challenges we face in mitigating human-bear conflict are the same. Learning from each other can be a catalyst for progress.”