The last 10 years have seen the European rewilding movement go from strength to strength. Europe’s policy space has become increasingly supportive of rewilding over this timeframe.

From the very beginning, it has been Rewilding Europe’s mission to practice rewilding in the field, rather than simply talk about it. Together with our local partners we are now working in nine large pioneering areas in Europe to realise our vision, providing inspiration for hundreds of other rewilding initiatives and underpinning the ongoing growth of the rewilding movement. 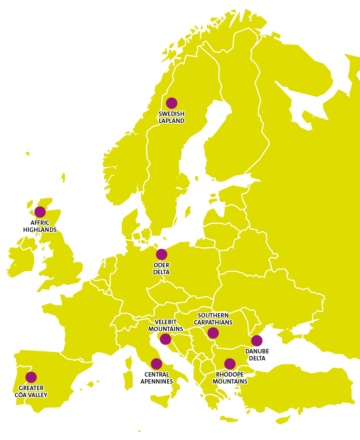 Despite this focus on the practical, Rewilding Europe recognises the critical role of European policy in enabling rewilding to happen at game-changing scale. Over the last decade Europe’s policy space has evolved significantly with regard to nature recovery – with the launch of the European Green Deal and the forthcoming Restoration Law, and the strengthening connection between the biodiversity and climate agendas, rewilding is increasingly recognised and supported as an effective and potentially transformative nature-based solution.

“Rewilding Europe’s principle approach has always been to influence policy by showing policy makers tangible examples of what rewilding can achieve on the ground,” says Frans Schepers, Rewilding Europe’s Managing Director. “Today, Europe’s conservation-related policy space has never been stronger. We now need to make sure EU-level policies are adopted and legally binding targets adhered to at a national level.”

Sergiy Moroz, the European Environmental Bureau’s Policy Manager for Biodiversity and Water, is part of a group of NGOs actively campaigning for a more ambitious Restoration Law.

“The proposal for the law is still being finalised, but everything is still progressing. There will be targets, although we are currently pushing for them to be more ambitious. But whichever version of the law is eventually enacted, it represents huge progress compared to where we were 10, or even five years ago, when we were defending the EU’s nature legislation through the huge mobilisation of NGOs and citizens. For rewilding and nature recovery-related policy, the building  momentum is really encouraging.”

Rewilding Europe has produced a range of important rewilding-related policy documents over the last 10 years. Our Policy Brief, released in May 2016 and written and researched by Frans Schepers and Dr. Paul Jepson, called on the European Commission to acknowledge the rise and significance of rewilding in its nature conservation and land use policies going forwards.In 2020, a set of policy papers were produced calling on EU politicians to prioritise nature restoration and providing them with critical and effective new tools to do so.

Co-authored by Rewilding Europe, together with BirdLife Europe and Central Asia, European Environmental Bureau, the Martin Luther University Halle–Wittenberg, the German Centre for Integrative Biodiversity Research (iDiv), and the WWF European Policy Office,  the papers were the culmination of a three-year, WWF Netherlands-funded programme to promote and strengthen Europe’s restoration agenda.

Last but not least, the three-year, Rewilding Europe-coordinated GrazeLIFE initiative, which has effectively come to an end, released a comprehensive report in March outlining how European policies – particularly the European Union’s Common Agricultural Policy (CAP) – could better support extensive grazing (where low-density livestock populations feed on natural vegetation). The initiative, which was funded through the EU’s LIFE programme and carried out at the request of the European Commission, evaluated the benefits of various types of land management involving domesticated and wild/semi-wild herbivores.

What a year it has been!

A new year means a new outlook for Rewilding Europe!