A collaboration with the Zoological Society of London saw multiple camera traps deployed in the Velebit Mountains and Rhodope Mountains rewilding areas this summer. The information collected should enhance the ongoing rewilding of both areas.

Accurately assessing how rewilding efforts are affecting landscapes and wildlife populations is critical, both to maintain and build support for rewilding and to inform future decision making. A collaborative rewilding agreement between Rewilding Europe and the Zoological Society of London (ZSL), which was signed in December 2020, saw camera traps deployed in both the Velebit Mountains (Croatia) and Rhodope Mountains (Bulgaria) rewilding areas this summer. The collection of images from the traps – and their subsequent analysis – will hopefully lead to a greater understanding of how wildlife is returning to the areas, and the measures needed to support and enhance this comeback.

“This first deployment of camera traps should provide the rewilding teams with baseline measurements of the density and abundance of key wildlife species,” explains Jelle Harms, Rewilding Europe’s Geospatial Coordinator. “Then, when the camera traps are redeployed in three to five years’ time in the same area, the teams will be able to see whether populations of wildlife species are going up or down, how effective rewilding measures have been, and whether anything needs to be changed.”

The two camera trap studies are the first of their kind carried out in rewilding areas. In both areas the cameras were deployed according to scientifically designed grids – ZSL assisted with grid design and provided remote support during deployment, and is also responsible for post-deployment image processing and analysis.

“Jablanac is characterised by its rocky, hilly landscape, so getting the grid set up was a demanding, five-day job,” says Jelle Harms, who helped the local rewilding team with the deployment, together with Deli Saavedra, Rewilding Europe’s Head of Landscapes, and Raquel Filgueiras, Rewilding Europe’s Head of Rewilding.  “What the cameras saw in the time they were in place will now be extrapolated and used to make assumptions for the whole area.”

The plan is to monitor three sites within the Velebit Mountains rewilding area with camera trap studies. Next year the plan is for the deployment team to return to the far larger Ramino Korito Hunting Concession to redeploy cameras, which will require a different survey design and possibly even greater efforts to deploy the cameras.

Results from the camera trap studies can be shared through online platforms such as ArcGIS, which has also been rolled out across Rewilding Europe’s rewilding areas. Such data not only relates to the presence of wildlife but also factors such as habitat type, vegetation and local disturbance by people at the camera trap location.

“This gives us an idea of what factors are driving trends in wildlife numbers and densities,” explains Jelle Harms. “In places such as the Velebit Mountains, where rural depopulation has led to the disappearance of domesticated livestock, it also indicates whether the area could support more grazing by native herbivore species. Such herbivores would help to control encroachment by vegetation, which tends to lower the biodiversity value of the landscape and increase the risk of wildfire.”

In the Rhodope Mountains rewilding area the camera trap deployment was carried out in the Studen Kladenets Reserve. While the landscape here is fairly similar to the Jablanac Hunting Concession, its larger size demanded a different grid design. Here the priority species for density estimates were red deer and fallow deer, although cameras were set up in such a way that they could also target other species such as wolf, golden jackal and smaller mammals.

“Two overlapping grids using a total of 40 camera traps were deployed by the local rewilding team,” explains Jelle Harms. “These were left in place for one month and then redeployed one kilometre away from the original grid.” 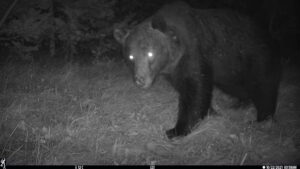 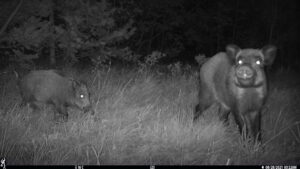 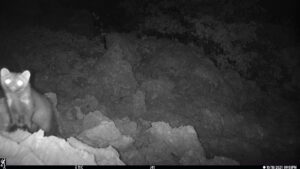 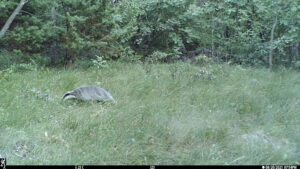 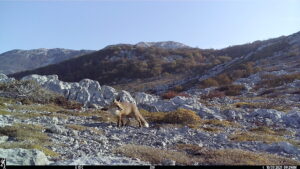 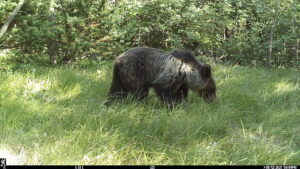 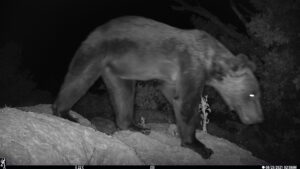 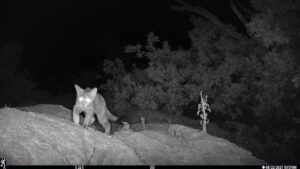 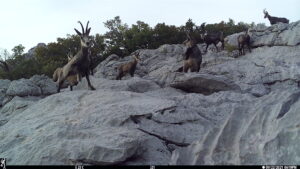 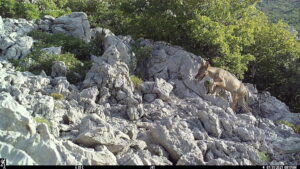 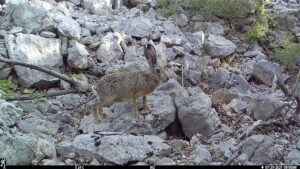 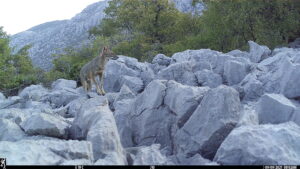 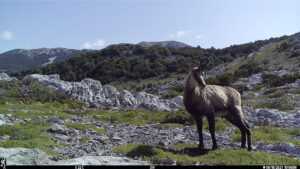 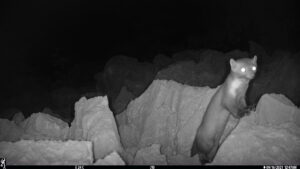 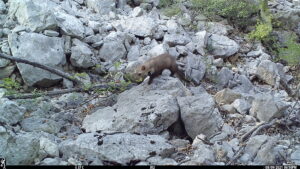 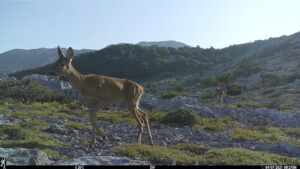 Now that the camera trap studies have ended local rewilding officers have already had a sneak peek at some of the images collected. These have captured a pack of five wolves on a nocturnal prowl and fallow deer in the Rhodope Mountains, and a bear destroying a camera in the Velebit Mountains. The imagery and data from the studies is now with ZSL for filtering and analysis, with results expected in early 2022. This will see the creation of wildlife species density maps for each area.

“At this point we will be able to tell whether these deployments were successful,” says Jelle Harms. “If so, we will evaluate the possibility of using similar studies in other rewilding areas. Not all areas will be suitable – the Danube Delta, for example, is too wet, which means other wildlife monitoring approaches have to be used.

“One of the other objectives of the agreement with ZSL is to develop technological solutions that allow the impact of rewilding to be sustainably monitored over the longer term. Hopefully, these studies will prove efficient in terms of resources, as well as insightful.”