A yet relatively unknown place in Portugal near to the border with Spain, with amazing birdlife, home to one of Portugal’s most important, large, independent nature reserve – Faia Brava. An area where wild nature and wildlife is coming back.

The river gorges, oak forests, rocky heathlands and scattered crops constitute a spectacular mix in the Côa valley, between Douro river and Malcata range. The abandonment of a big part of the old crop land has brought a new opportunity for the comeback of wildlife. 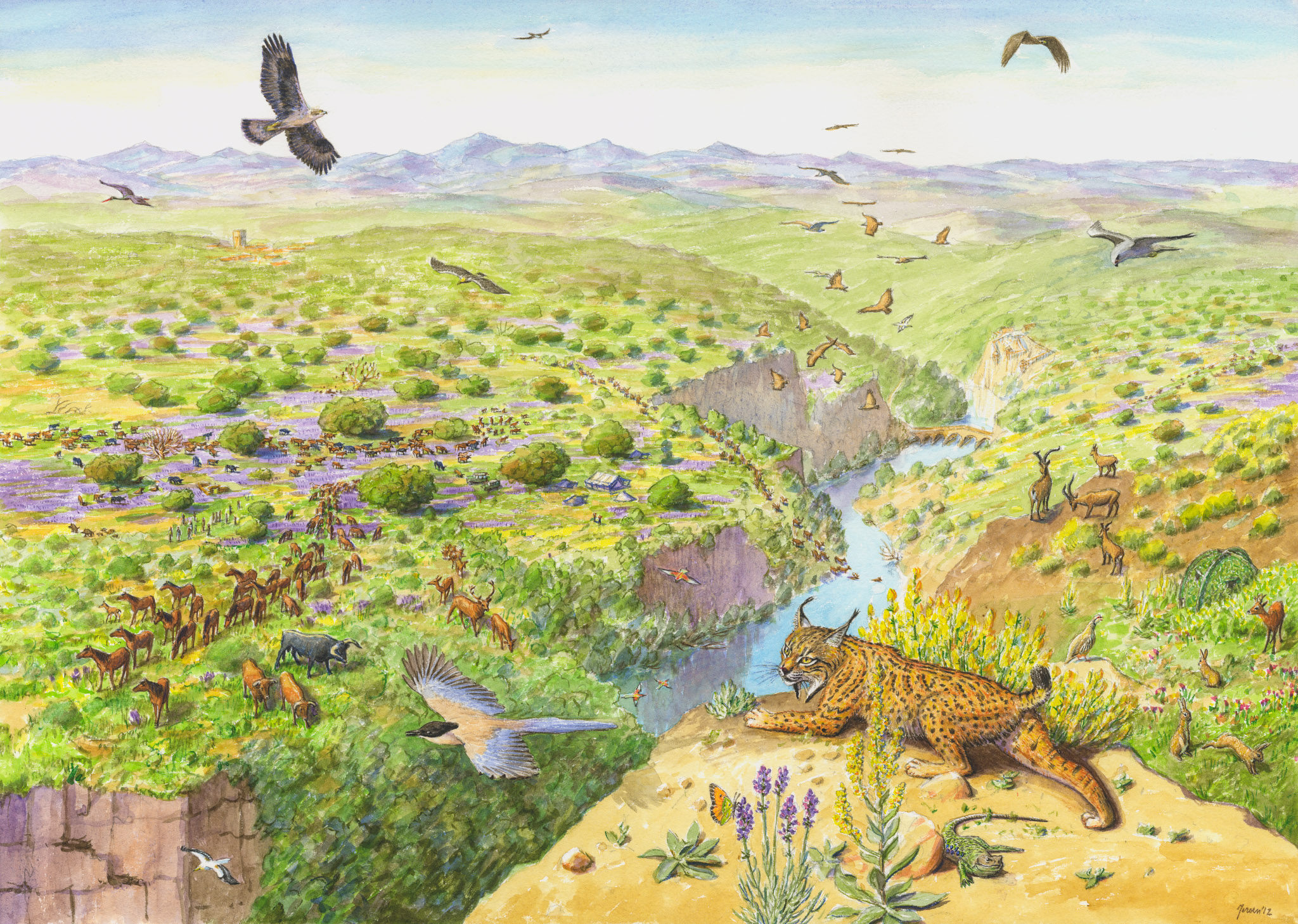 Western Iberia’s rich and varied Dehesa, Montado and Sierra landscapes, crossed by deep river valleys that straddle the border between Portugal and Spain, has become one of the most exciting wild areas of the Iberian Peninsula. A large part of the landscape is now regulated mainly by ecological processes. Here wildlife thrives in natural densities and the previous very active land management has taken a clear step back towards non-management. In combination with some of the old local traditions, ways and products, this new wild dimension has created new sources of income and pride for the region’s inhabitants. 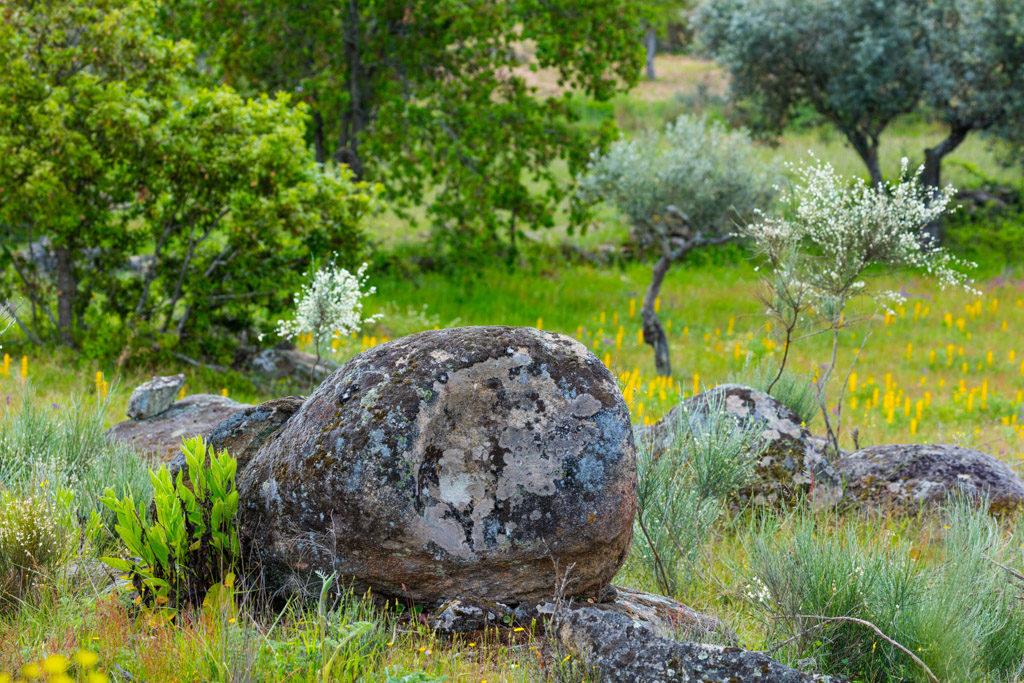 The unbroken ecological integrity of this vast Mediterranean ecosystem has been secured in this rewilding area in Portugal, while at the same time large parts of it have become much wilder than before. Core rewilding areas with no-take zones have been established, that are connected through wildlife corridors and surrounded by transition- and buffer zones, where people still use the landscape in relatively traditional, but more sustainable and wildlife friendly ways. 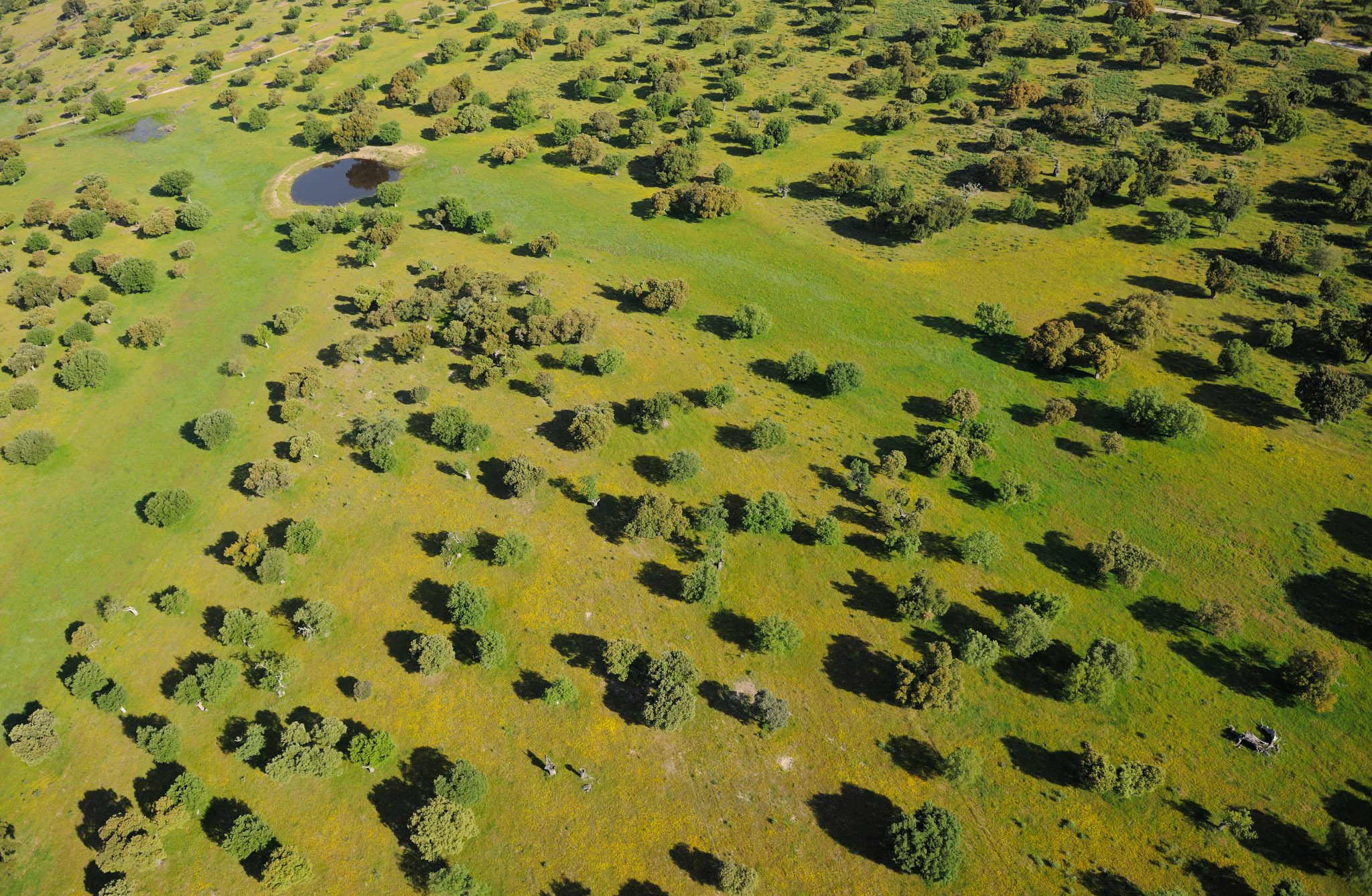 Western Iberia has not become a huge, unbroken wilderness area, but rather a much wilder version of the Dehesa/Montado habitat, containing several really wild zones where the full original native range of species is back in place. The management principle practiced in the core areas is based on allowing for the natural processes and letting nature manage itself to an as high degree as possible, through a gradual process from the former active management. 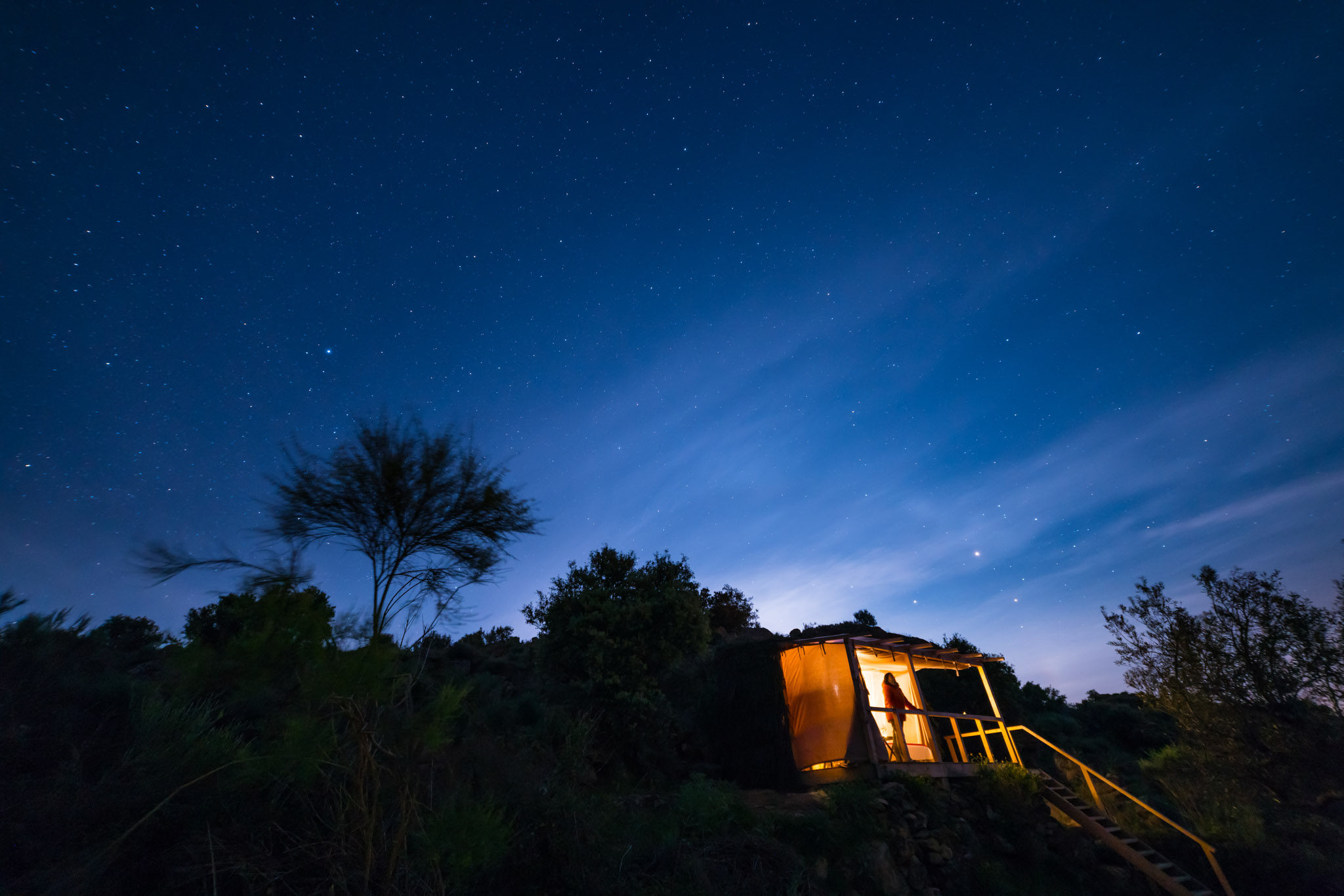 Western Iberia has attracted new, young people, for whom it provides business opportunities based on these wild values, local products and culture, thereby contributing to its future. The negative spiral of land abandonment, loss of biodiversity and diminishing local culture has turned into new prosperity, attracting and inspiring many visitors, also from far outside the region. Western Iberia is ecologically connected to similar natural, wild areas in other parts of Western and Northern Iberia, through the Natura 2000 network, and the rewilding team actively works also with this connectivity.

As a result of rural depopulation and associated land abandonment across much of the Mediterranean, grazing livestock numbers have plummeted, leading to a very significant increase of landscapes without any form of grazing. As a result, many landscapes are now covered by young, often monotonous forest or dense scrub.

One obvious case where this has happened is Portugal’s Côa Valley, part of of the Western Iberia rewilding area, in a region with the higest levels of land abandonment in the whole of Europe. The proliferation of bushes here, coupled with the close plantation of pine and eucalyptus trees, means the landscape is very susceptible to forest fire, with this problem exacerbated by long hot summers driven by climate change. Although fire is a natural process in itself, the current frequency and intensity of fires not only causes severe habitat loss and environmental degradation, but also serious economic losses and even loss of human life.

By bringing back grazing – this time not with livestock but with (semi-) wild herbivores such as wild horses and Tauros – Rewilding Europe and its local partners can significantly reduce the risk of fire in the Western Iberia rewilding area. Reintroducing such herbivores will also improve conditions for populations of roe deer and Iberian ibex. Natural grazing by these species leads to the creation of more diverse mosaic landscapes, with open spaces that act as effective firebreaks.

These mosaic landsapes have a huge biodiversity and also help boost populations of species such as rabbit and red-legged partridge, which in turn increases the availability of prey for predators such as the Iberian lynx and Bonelli’s eagle, and scavengers such as vultures.

The Western Iberia rewilding area is well-placed for such nature-based tourism. Situated between the Douro River to the north and the Serra da Malcata in the south, the Côa Valley is a spectacular mix of riverine gorges, Mediterranean oak woodlands and shrubs, rocky heathland and former cropland and orchards which are now returning to nature. The 200-kilometre long Côa Valley Grand Route takes tourists and nature lovers through the Faia Brava Reserve, enabling them to enjoy its diverse wildlife and discover the beautiful countryside of Portugal. With the area now welcoming more than a thousand visitors annually, revenue growth for the nature-based enterprises here has already been substantial.

Rewilding Europe is working with its local partners to shape the Côa Valley through the development of a 120,000-hectare wildlife corridor – the Greater Côa Valley – that connects the Malcata mountain range in the south with the larger Douro Valley in the north. Innovative land-use models will be applied in a region with one of the highest land abandonment levels in Europe, transforming threats of landscape degradation, rural depopulation and economic downturn into new opportunities based on rewilding principles.

To reach this goal we are focused on securing strategically located core areas and connecting them by signing land-use agreements with landowners and hunting associations, and on restoring natural processes such as herbivory, carnivory and scavenging in the zones between them. By allowing species such as Iberian ibex, wolf and Iberian lynx to make a comeback, this will hopefully boost biodiversity significantly and underpin a burgeoning nature-based economy that serves as a regional role model. Once a more natural state has been reached, the Côa Valley has the potential to become one of the main migration routes for wildlife in this part of the Iberian Peninsula. How would you characterise your rewilding area?
Western Iberia is a biodiversity hotspot where rewilding can really take shape. It is a large arid open forest landscape, with steep valleys and inaccessible areas, where wildlife has been able to survive the loss. This compact area boasts a multitude of habitats and species, as well as signs of human activity and wildlife that go back nearly 30 000 years.

What have the major achievements been in your rewilding area to date?
One of the main achievements has been persuading people that wildlife comeback and land abandonment represent an opportunity, rather than a problem. It has been fantastic to see top predators like the wolf return, black vultures nesting and breeding, and the Iberian lynx and imperial eagle starting to reappear. We have also built a cluster of nature-based businesses that are now going from strength to strength.

What would you like to see achieved in your rewilding area in the next five years?
I’d love to see 500 000 hectares of real rewilding area stretching to the Spanish border. That would connect two mountain ranges and two main canyons, strengthening the wildlife connection between northern and southern Iberia. And it would obviously great to see species such as the ibex, chamois, lynx and bear return.

There are many ways to discover Western Iberia, from a relaxing long weekend to tackling 200 km of marked Grande Route trail along the entire Côa Valley – by foot, mountain bike and even horseback over multiple days. Find your ideal combination of wildlife and culture, using expert guides and staying in handpicked accommodation.

Associação Transumância e Natureza (ATN), our local partner organization works hard on creating an attractive ‘model’ of how a rewilded site could function here, using the core area: the Faia Brava reserve (owned and managed by ATN). The Archaeological Park of the Côa Valley has already expressed a strong interest to participate.

Odile holds a BS in Biological Sciences (1994) and a BA in Cinema Production (1995) from the University of Southern California, Los Angeles. She started her career in 1996 at National Geographic Television in Washington DC as an intern, associate producer and producer. Among others, she worked on a film about rain forests in Mexico and a major, worldwide communication campaign on conservation, in collaboration with IUCN.

In 2004, she was the Director of Scientific Film Awards of Ronda, the first initiative of its kind in Spain. In 2005 she worked as a producer at RTVE, doing a production of a two-hour documentary of the life and work of her father Félix Rodríguez de la Fuente. In 2006, she became a member of the board of WWF Spain.

Currently, Odile’s main work is for the Fundación Félix Rodríguez de la Fuente, an important NGO in Spain, named after her father who was a very famous Spanish nature filmmaker. Félix Rodríguez de la Fuente produced some very famous films and books. Unfortunately he died in a plane crash in Alaska when Odile was only 7 years young. Odile has followed the footsteps of her father and dedicates her life to protect and to communicate about nature and its wonders.

About her father, Odile says: “I always wanted to follow on my father´s footsteps even before he left us but the impact of his sudden death probably influenced me even more to dedicate my life to the defense and communication of nature and its wonders. My father supposed a huge influence in Spanish conscience about conservation. He was responsible for positioning Spain as one of the pioneering countries in Europe to first have laws protecting predatory birds and wolves. If we still have wolves in Spain it is because of my father´s work both on a political level but mainly as the most popular communicator in Spain during the 60´s and 70´s. His television series “El Hombre y la Tierra” was first on ranking for the eight years they were aired in Spain, surpassing any other international documentaries (like BBC or National Geographic) in both technological and narrative style. They were seen by millions of people worldwide including countries like Russia and Japan and showed Spanish fauna and flora to Europe and the world.

On the editorial end his best known work was the world wide encyclopedia “Fauna”. It was translated into 16 languages and sold more than 40 million volumes worldwide.’’

As a conservationist, Félix Rodríguez de la Fuente was the co-founder and vice-president of WWF Spain and responsible for the preservation of many of the most important wild spots in Spain that are now National and Natural parks. He is still a major reference in Spain and many Spanish speaking countries and his style and passion still motivate and are an inspiration to thousands.

For Rewilding Europe, Odile Rodríguez de la Fuente will have a particular role in communication and networking, representing the initiative towards certain external audiences, especially in the Mediterranean parts of Europe. She will also help facilitating to reach certain target groups, such as major land owners/holders in the rewilding areas, national top media, and early adopters within the key government structures in Spain and Portugal.